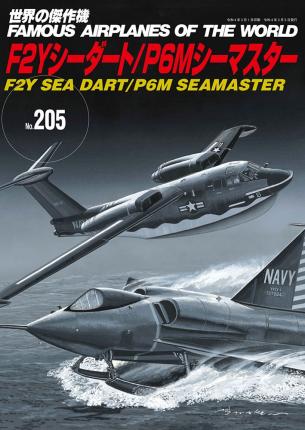 The U.S. Navy planned to build the super-large aircraft carrier "United States" at the end of the 1940s. However, at the time the Air Force was deploying strategic bombing as a means of delivering nuclear weapons, and the government would cancel the plan due to the huge construction cost. The Navy devised a surface-based fighter, thinking that it would not be possible to operate a supersonic jet fighter without a large aircraft carrier. That was the F2Y Sea Dart.

Also, as an alternative to large aircraft carriers, they promoted the Seaplane Striking Force configuration, in which nuclear weapons are mounted on jet flying boats. The Sea Dart and SeaMaster were discontinued due to technical challenges, dramatic improvements in the performance of carrier-based aircraft, and the emergence of alternatives such as the construction of new large aircraft carriers, but they still had a strong presence.

This volume of "Famous Airplanes of the World" brings us the story of both of these machines as two major special features. Order yours today!