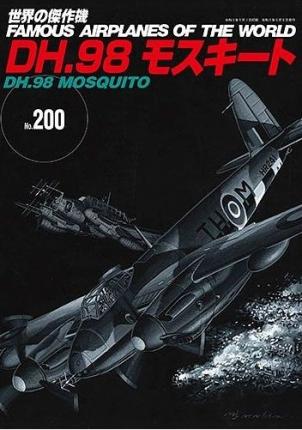 The DeHavilland .98 Mosquito is the subject of this latest issue of "Famous Airplanes of the World"! The Mosquito excelled at dodging enemy interception at a speed that fighters couldn't keep up with, with a sleek fuselage and twin-engine form. It was characterized by avoiding the use of metal, in short supply due to the war, and using wood for most of the fuselage structure. Adopted by the Air Force in 1940, it was expected to have high-speed performance; the reconnaissance type was ordered first, followed by the bomber type. At the same time, a fighter type was also offered, and after that various derivatives such as a night-battle type, a fighter-bomber and an electric shock type were made. It was also very active in ground attacks. Order yours today!