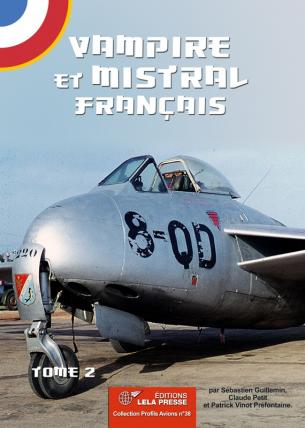 If the Vampire was designed and used as a fighter aircraft by the Air Force, this use should not have been its prerogative very long. The arrival of American aircraft as part of the MDAP, the progressive development of Marcel Dassault's hunters, won him the spotlight, especially since they were more modern and simply better. However, it was necessary to find it useful: it is within the Hunting School of Meknes that the Vampires will be used for the reactor transition of young pilots.
On the other hand, the Mistral, ordered for 247 copies, was not used for pure hunting despite improved performance. It was his ability to carry bombs and rockets that made him meet history: operations in Algeria will highlight its offensive potential in all fighter wings in North Africa.
Volume 1 dealt with the technical, industrial and operational history of the two models, then followed their day-to-day use by metropolitan and German squadrons. This second volume will continue the narration of their employment, but this time within AFN's squadrons, in the context of the Algerian conflict. A place is also made at the squadron of Creil reservists, before returning in detail to the employment in the schools of the Air Force and the Navy. In addition, the use of Vampires and Mistrals by the CEV and finally in the Sahara is highlighted.
The work is supplemented by a long chapter devoted to Vampires imported into France as collector planes. And, to the satisfaction of amateurs, a chapter reviews the brands and badges, and all the models allowing, over the years, to represent the first combat jet in France.
About 1000 photos, 32 profiles, all on 400 pages. Color profiles by Patrice Gaubert - Drawings by Claude Petit - 1:72 scale plans by Régis Biaux.

We talk about it in the press and on the Net:

- First operational jet aircraft in the Air Force, the Vampire did not yet have its full monograph. Today it is done, and in a beautiful way! No less than 800 pages, 1,700 photos, 50 profiles of the excellent Patrice Gaubert, around a hundred testimonies from the actors of this period are gathered in two exceptional volumes to pay tribute to this plane which allowed France to enter the era of combat jets. 43 years of research were necessary for the three authors, including the historian of aeronautics Patrick Vinot-Préfontaine, father of our comrade Benjamin Vinot-Préfontaine (EA95-Gauthier), to produce this exhaustive compilation. The first volume successively takes up the history of the de Havilland DH.100 Vampire and its French version SE.532 / 535 Mistral, with its operational use, the detailed technical description of the different versions with numerous diagrams and plans, then lists the units in which they served, in France and Germany. An important annex details the individual life of the 574 aircraft built.
As for the second volume, it focuses on the operational life of the Vampires in the hunting school of Meknes and the Mistral
during the Algerian war. As well as on their employment in the reserve of Creil, the schools of the Air Force and the Navy, at the CEV and in the Sahara.
With these two volumes we have a veritable monument dedicated to an airplane which marked a whole generation of our comrades. A "winning Mistral" which will be the pride of your library. © JPC- PIEGE N ° 242. (Review of former students of the Air School).

- Another 2 volumes that go off the beaten track where one finds only German or American planes. Here we have the story of a plane certainly of British origin but implemented by the Air Force at the end of the 2nd World War. These two volumes are comprehensive and provide a good history of aircraft aircraft and missions. It is a bible, it is really essential. To put in Santa's hood. © Claude Balmefrezol - maquetland.com

- What can I say that I did not say when I commented on the 1st volume (new books, magazines May 2020)?
The 2nd volume continues where the 1st left off with the histories classified by units (6th, 7th, 8th, 10th, 20th squadron, 2/17 Valois training and calibration squadron). Then the authors attack the devices used in schools and those used at CEV. Finally we come to the Air Industrial Workshops, Parks and Workshops, Air Force Warehouses and the Civil School of Cap Matifou. Next are the Vampires of Naval Aviation.
To note in the chapters on the CEV and following ones (page 265-295) a long file on the remotely piloted vampires including their use during the nuclear tests in the Sahara.
All these chapters are interspersed with long anecdotes told by those who lived them (this book was written over more than 30 years, so the authors had the opportunity to meet many actors of this saga. When we look at the acknowledgments, it there is almost a whole page of thanks to the witnesses of the Vampire adventure)! This large-scale research work is also reflected in the iconography, which is also "monstrous" and almost entirely new!
850 photos (including almost 100 in period colors)
34 color profiles (we can regret that the captions do not refer to the pages where the reference photos are)
· Many caricatures taken from JMO
And then there are the appendices:
List of Mistrals
The surviving Vampires and in the French Museums
Decorations and brands
· And even a small chapter models! (by Régis Biaux)
· An afterword “in memoriam” (*) (**)
Nothing to say, this is a "must"! My conclusion will therefore be the same as for the 1st volume: an impressive "Great Work" for which my only criticism will be the absence of an index, a chronic disease of almost all French publications! For the rest it is faultless, clearly "produced with love" by the authors who have been able to make use of a whole network of correspondents (and by the publisher who should not be forgotten: print quality of the photos, clear layout, color codes on the edge to distinguish the chapters…) 120% success (yes I have increased the success rate since the 1st volume !!!!). © Modelstories 2021

- A squadron badge on the front hatch of a Vampire or Mistral is for many of us the memory of a time when the Air Force was opening to the general public. and fans of French cockades. This era which excited us, the three authors remind us magnificently by transporting us to North Africa within three fighter squadrons successively equipped with these two types of hunters: the 7th CE in Sidi Ahmed (Tunisia), the 6th EC in Oran (Algeria) and 8th EC in Rabat-Salé (Morocco), without forgetting the solitaire EC 1/20. Alongside the old F-47s present since the post-war period in the 5th RA and maintained until the beginning of 1960, Vampire and Mistral came to constitute from the end of 1951 what was then called heavy hunting on the theater. AFN operations. This book traces the operational history of these units during their training periods, and especially during their fire support missions for the benefit of the troops on the ground. Very well documented, it offers in particular a very rich iconography as well as a large number of testimonials from pilots which make its reading captivating. Another surprise, some very precious color photos of the planes of the EEC 2/17 "Valois", a squadron of reservists based in Creil. Before leafing through the exhaustive list of Mistral production and rediscovering the period decorations and markings, the authors take us to schools, to the CEV and to Colomb-Béchar. Then it is the Vampires of Naval Aeronautics who come to close this superb work, a continuation of volume 1 presented in AF468, devoted mainly to the genesis of these two types of aircraft and their use in the squadrons of Metropolis. AC 400 pages, 1000 color and B&W photos, profiles © Alain Crosnier - Aif Fan.

- Here comes the saga of the Vampire and and Mistral under our cockades. The first volume, after history and technique, described operational use in four squadrons.
This new volume continues the review of the units, the 6th, 1st, 7th, 8th, 10th and 20th squadrons as well as the school units, the remote-controlled vehicles. The 57S flotilla using Vampires in Naval Aviation has not been forgotten. This volume is more oriented towards the operational side of the apparatus, the units concerned having mainly operated in Algeria. Among the appendices, the surviving aircraft, the badges worn and two pages for the model makers, unfortunately limited to 1 / 72nd.
All parts are teeming with stories from staff who have practiced the Vampire or Mistral which makes this book even more alive, more human. We can repeat our comments from the first book. Let's just say the text is still so nice,
The years of the Second World War, especially because of the Occupation, caused a delay in aeronautical research and production for France. In particular, the country was not prepared for the arrival of the jets. The Air Force therefore had to quickly acquire available machines before being able to rely on devices produced in France. The choice fell on the little de Havilland Vampire fighter, some planes delivered whole, others assembled and produced under license. This production resulted in a more powerful French version, SNCASE Mistral, used in operations in Algeria.
Lela Presse offers us, in two volumes, a detailed study on this part of our aeronautical history. The first volume has a very classic summary. Almost 100 pages are devoted to the history of the Vampire, conception and use, in the world but especially in France. Then comes a technical part of about thirty pages before going into the details of the history of the aircraft within each unit with, for this first volume, the 2nd, 3rd, 4th and 5th Squadrons. To finish with interesting appendices including an exhaustive list of devices with their fate.
The authors are not at their first attempt on the subject, since two of them had cooperated to publish a substantial volume on the subject in 1980 in "Le Trait d’Union", a reference work. Of course, this new publication is not a repeat because the text, completely revised, is enriched with new documents and testimonies. It’s remarkable work, very precise without ever being boring. It is served by a very rich and often unpublished iconography, with many color photos and superb profiles of Patrice Gaubert.
It is obviously the reference work on this little hunter that allowed France to start in the jet age. To acquire quickly, to be patient before the publication of volume 2!
384 pages, 850 photos, 25 profiles, technical sketches, text in French. © J.-L. FOUQUET - Cocardes.