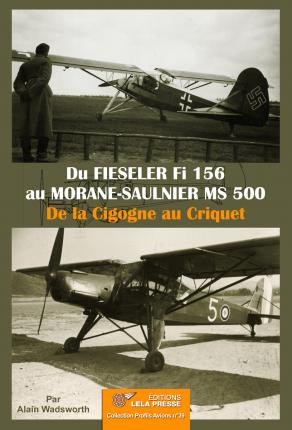 DESCRIPTION:
A spy for our soldiers in 1940, an artillery adjustment plane or a rescuer for our wounded in Indochina or in AFN, then a tug for our vlivoles of the Sixties, the Storch is now a star at airshows.
We will discover together its history, its many adaptations and its exploits.
This work has been carried out drawing on a large amount of both public and private archives. These have been exploited by avoiding repeating statements based on hearsay. Indeed, a large number of sometimes fanciful statements have been made about this device and it has been attempted to take stock each time an original technical documentation existed. Completeness is not claimed, but has been attempted to come close.
The reader will undoubtedly understand the complexity of the task and will certainly apologize for any errors or omissions that may arise. This is particularly true for the history of each French device that completes this work. The archives of the post-war period are very incomplete, human memory was then more in demand and traceability not yet fashionable ...
The author simply hopes that this book will bring back fond memories to pilots who, like him, were lucky enough to fly it, to glider pilots who, like him, were towed by the "Storch" and will help all those who restore. or maintain this wonderful machine ...
About 320 pages, more than 380 photos, diagrams and plans as well as about twenty color profiles.

After the NC900, the Amiot AAC-1 Toucan, the authors of Lela Presse are interested in a third German aircraft produced and used in France after the war.
This work first deals with the Fieseler Fi 156 Storch, its prototypes and developments, including the Fi 256 which has the reputation of having been designed in France (but the author has hardly found any French archives at the support of this version).
Then we "shift" to the post-war Morane 500s, again with a detailed description of the variants and production lists.
It will be understood that the strengths of this book are the technical description of the devices (very detailed: the author has identified the slightest modification, often with its date and the document which orders it) and the production lists. Do not look here for details on the operational use of the device, even the chapters entitled "photo libraries" presenting period photos and ending with restored planes point more to the special technical characteristics than the users ... (it is significant that what often appears as the high point of the use of the device by the Germans, that is to say the escape of Mussolini, is not even mentioned!) To note an entire chapter devoted to the various motors mounted on this device.
However, the iconography is simply remarkable, probably the best on the subject in a French language work.
Fieseler Fi 156:
141 vintage B / W photos
· 46 period technical sketches including camouflage and markings diagrams (very useful for model makers)
· 15 advertisements and other facsimiles of period documents
Fieseler Fi 256
10 vintage B / W photos
7 technical sketches
Morane Saulnier MS 500 and derivatives
110 photos in B / W or vintage colors
37 technical sketches (again with official diagram of French military marks)
8 pages of plans at 1/48
Restored planes
25 color photos (not captioned)
There are also over 100 pages of production lists with brief "biographies" of each MS 500/502 aircraft and a production list of the Fi 156s built at MS during the war.
Conclusion: ideal for the model maker who will find here everything needed to detail the model of his choice. © Modelstories 2021

- The Fieseler 156 Storch is one of those big “little” planes. Neither fighter nor bomber, therefore not crowned with glory, this small, frail-looking observation and liaison device served tirelessly for several decades both in the air force and with civilian users. Designed in 1935 from a tubular structure and canvas-covered surfaces, the Storch demonstrated exceptional flight qualities, short landing and take-off, and even flying "on the spot" under certain conditions. With its large glazed surface, it very quickly became the Luftwaffe's observation plane, the one that our soldiers quickly described as a "snitch". But he served well beyond the war.
Alain Wadsworth's book details the technical evolution of Storch, a German appellation, to Criquet, a French nickname. The chapters deal with the Fi 156, Fi 256, MS 500 with its derivatives, then the engines used before a bibliography and an appendix of 130 pages including plans, characteristics and above all, on 85 pages a history of all the French MS 500s.
It is very technical and on this level almost perfect, the documentary research leading to a reference study. The iconography is up to par, for unpublished images, plans, technical drawings and even period engravings. Unfortunately, the Photo Library section has no caption.
Note the twenty superb profiles signed Vincent Dhorne, all French except for one Vietnamese!
But on the operational side, we are a little disappointed, it's a vacuum. A few rare pages of anecdotes sprinkled sometimes, but no story, no pilot's story, nothing on the Gran Sasso, Hanna Reitsch, gliders, films, which would have made it possible to attach the machine to its human history because there is so much to write on this subject. It is a choice of the author but, in our opinion, a lack in a monograph.
There remains a remarkable work on the technical evolution of the aircraft, especially for those used under our cockades and there, it is incomparable. © J.-L. FOUQUET for Cocarde