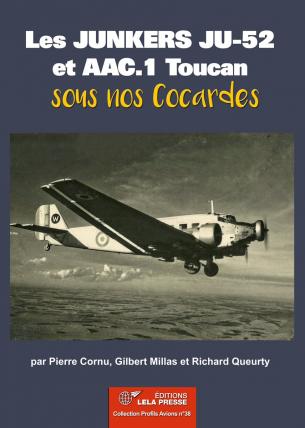 A German engineer, Hugo Junkers was the pioneer in the construction of all-metal airplanes and, from 1914, he developed several models dedicated to air transport. The culmination of this series of planes, the prototype of the Junkers 52, designed in 1930 at the request of the national airline Lufthansa, was first a single-engine, then the Ju 52, in its final three-engine version, flew in 1932, few time before Hugo Junkers left his factories under the control of the National Socialist power.
Thanks to its qualities of reliability and robustness, the Ju-52 is a huge success: built mainly in Germany to more than 4200 units, but also in Spain to 170 units with the name Casa 352, it flies under the colors of several Airlines companies. Unfortunately, it was above all its military use by the Luftwaffe during the Spanish Civil War and then during the Second World War that made famous its singular silhouette and its corrugated iron coating.
In France, under German occupation, the Amiot factories will still produce 538 devices. The Ju-52 is so well designed that in 1944, while the German armies are withdrawing, it is decided to continue production under the name AAC.1: the goal is to rapidly increase the air transport capacity of the armies. then in full reconstruction. Channels from the Ateliers Aéronautiques de Colombes (AAC) will release 415 AAC-1 called "Toucan".
Until the sixties, alongside the 38 Ju-52 seized from the defeated German armies, the Toucan will be used in all the latitudes where France will be engaged: in Europe, to repatriate the populations displaced by the war, in Indochina, in Madagascar, in Africa. The Air Force will be the primary user, but Naval Aviation will also be equipped. Air France and no less than seventeen French airlines, as well as certain administrations, will share with the armies the experience of the "Julie", the nickname given by the crews to the rustic three-engine.
It is the life of each of these planes under the cockades of the French Air Force and Naval Aviation that recounts this book, widely documented by the testimonies of those who flew in crew on "Julie" and illustrated by more of 800 photos and 50 profiles.
Reliable and robust aircraft of which nearly 5,400 copies were produced in Europe, the legendary three-engined aircraft deserved that the pages of its long history under the French colors be finally gathered in this book which pays homage to it.

We talk about it in the press and on the Internet.

- I received, a few weeks ago, your book on AAC1 under our cockades.
What to say...
That every time I am delighted? You know it well. Obviously, I am very happy and even more this time.
Thank you already for your kind friendly words which make me very happy, this book in my eyes, is only more valuable.
Definitely and I say it again, I really got my money's worth. Damn, this book is good, the testimonials, the photos are really beautiful. It is a true reference work on the plane and its crews.
I think that the formula of these works should serve as an example of what must continue to produce in the future, because every aerophile finds material there.
I warmly congratulate the authors and LELA editions for this sum that I truly devour and of which I taste each page with immense pleasure.
I keep the mortars and the county in reserve for a possible meeting.
I wish you good and beautiful things for this summer, and
especially to continue to bring us such delicious Kerosene.
Best regards - L. DIEMUNSCH.

- Another German aircraft produced in France and a totally different treatment from that of the previous work. Here we focus on units, old memories (with lots of "crisp" anecdotes about what a war flight on Toucan could be like.
The first 44 pages are about the export and use of Junkers 52 in different countries around the world.
From page 46 to 251 each unit that used the AAC-1 / Ju-52 is reviewed. This is the big part of this book and with the many testimonies from former aircrew, it reads like a novel. .unless it's real.
The following 50 pages, concern the technical description of the AAC.1 (but not of the Junkers Ju 52 ... we will never know the differences ... moreover in the testimonies it is well said that in unit we did not make any difference…). This section is accompanied by a beautiful 1/100 plan by P. Gaubert
Then 80 pages list all the AAC-1 with all their different assignments. The authors tried to illustrate each device with a photo ... a lot of research and a very useful aspect for model makers.
From page 380 to 385, it is the Ju 52 / 3m ex-Luftwaffe who are listed (but only their French life is listed, as the authors specify "there is always a doubt about the German identity of most of these Ju 52 / 3m ”)
From page 388 to 434 the authors present with plans and photos (especially aerial) the "main aerodromes frequented in Indochina"
And we end with 38 superb profiles of P. Gaubert, obviously taken from photos (but the source photos are not indicated).
I didn't count the number of illustrations, but be aware that there are at least 40 period color photos plus those taken in museums plus the very numerous (800 indicates the publisher) B / W illustrations. On this subject, I have sometimes criticized certain works in which the illustration consists of more than 50% of "trombinoscopes" of pilots. That is not the case here. With the exception of the chapter on Indochinese aerodromes (aerial views / maps) all the rest of the illustrations are only airplanes!
In conclusion: an impressive inventory of the AAC-1 and Ju 52 used by the French armed forces ... a pity all the same that the differences between the two devices are not explained, especially since the previous works on the Ju 52 devote only a tiny part of their pagination to the Toucan ... which is to say that the work of Pierre Cornu, Gilbert Millas, Richard Queurty, and Patrice Gaubert was necessary! © Modelstories

- The old corrugated iron will never be unworthy, on the contrary because it was all possible and imaginable hits like its friend the DC-3. Moreover, these two have crossed paths on a regular basis, friend-foe it doesn't matter. They weren't really warriors but more civilians in uniform, civilians who went there free of charge, even if it meant paying a high price ...
In France, under the occupation, the JU-52 was built by Félix Amiot and after the war taken over by the Ateliers Aéronautiques de Colombes or AAC of the AAC-1 Toucan type, but also in Spain under the name CASA 352 ... But this being written, it is under the cockades "made in France" that his very long career is described in detail by a trio (logical for a three-engine!) composed of Pierre Cornu, Gilbert Millas and Richard Queurty and these three s' are given to their hearts content as this subject is treated in a jubilant way, in a high-quality work, thoroughly treated in the smallest details and with the JU-52, it is not lacking in view of the multiple adventures and missions experienced by the four corners of the world by its crews.
Superbly staged and in pictures with a rigorous treatment of the many dedicated information ... In short, you can read this book with complete confidence, a little as if you were flying on board, band of lucky guys, because unfortunately since 2019 the few survivors are now banned from theft… But rest assured, there are quite a few preserved… © Fleuves & Canaux

- The authors had given us an extremely excellent work devoted to the C-47 under our cockades (even
editor). They reoffend with another servant, perhaps less famous to laymen, the JU 52 or, more colloquially Aunt Ju. More often associated with the Luftwaffe, where it served as a beast of burden throughout World War II, France used it in large numbers after the Liberation (the authors identify 38 JU 52 ex-Luftwaffe and 415 AAC.1 Toucan manufactured at the Liberation in Colombes in the old Amiot factories) and it flew, slowly but surely, under all skies and in all theaters of operations for the twenty years that followed.
Very pleasant, the book stands on par with its predecessor. It begins with a short technical description, taken at greater length in Chapter 3, followed by a short, complete and very interesting history, all accompanied by the list of known production and the user countries.
As with the C-47, follows the long list of user units (Air, Sea, CEV). If Air takes the lion's share, for the last two institutions the information is less but on such a complex subject, it is not surprising when one knows the state of the available archives.
The quality of the work provided unreservedly requires respect. Often, for our greatest happiness, more personal stories, full of truth, take us back 70 years. As for the photographs or the profiles, they are simply superb and will delight amateurs. A happy surprise awaits the reader in Appendix 5 since the authors have chosen to present a list, which we guess is non-exhaustive, of the main sites used in Indochina with photographs and field sheet when they exist. A superb icing on an already very nice cake.
A magnificent book that I recommend to anyone interested in post-war French aviation.
© Henry-Pierre Marquis - Le Trait d'Union.

- There is no need to present the Junkers Ju-52, this robust transport aircraft, first entered into service as a single-engine and then from 1932 in its three-engine Ju-52 / 3m version. First an airliner, with several companies around the world, he later donned the uniform, in Germany and Spain. Like other German planes, it was built in France during the conflict, notably in the Amiot factories. The qualities of the aircraft and the need for transport devices made it built after the war at the Ateliers Aéronautiques de Colombes, where it became the AAC-1 Toucan, in service until the 1960s.
It is this French career, the original Ju-52s and the Toucan that a trio of historians offers us, in a very large book.
About forty pages for the history of the Ju-52s, then the heart of the book with all the French units that have used the aircraft, with many testimonies, we live the missions with them, all supported by the images. Then there is a big technical part about the plane, then the list of Toucan and Ju-52 bearing our colors. The Indochina aerodromes with plans and photos and superb color profiles are attached.
A huge amount of research has resulted in a book that is as fascinating as it is precise, filled with facts, anecdotes and memories. The iconography is very rich, with often unpublished photos, plans, technical drawings, profiles. It is without context the reference work on the subject, the work of historians magnified by the publisher. © J.-L. FOUQUET - Cocardes