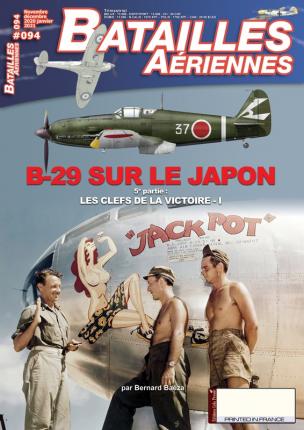 With this number, the B-29s are back! And upon reading the text, the reader will understand that despite all attempts to find new tactics, nothing was spared the crews of these giants of the air. In the first place, the technical problems, omnipresent and responsible for a large number of premature aircraft returns or, worse, accidents! Not to mention the weather and the lack of precision of the bombings. Of course, results were obtained, but the question arises, given the heavy losses, of the advisability and usefulness of this strategic bombing campaign. Despite fairly considerable resources implemented, it seems that the technology of the time was not yet able to overcome certain (essential) hazards, turning promising missions into bitter failures. Moreover, the main objective of these bombings, the destruction of the Japanese production tool, gave way on several occasions to terror bombings of the largest Japanese cities. These are the ones that have remained engraved, and for good reason, in the memory of the Japanese people as well as in ours!
Finally, the author recently informed us that three issues will be needed to end this B-29 "saga" over Japan. We will not complain because all of these issues will compose a remarkable and unique work in French, describing not only the operations of the four-engine aircraft but also those of all Japanese hunting.

5th episode in the history of the B-29s in the assault on Japan which begins in March 1945. Curtis LeMay becomes the boss of XXI Bomber Command and decides to attack at low altitude with incendiary bombs. New strategy that will succeed him, not without also bringing its share of problems (the first seems to have been the supply ... of bombs!). The crews will also discover the difficulties caused by flying over a city on fire at an altitude of 1,500 m. There will even be one pursued by a UFO ("a Japanese secret weapon" ... the subject of "Foo-Fighters" remains rather vague, even 75 years later)!
And managing to survive a parachute jump from a disabled plane is not enough: between the crews lynched by civilians, those who do not survive the mistreatment of the Kempetai and those who have the misfortune of finding themselves in a prison under the bombs of other B-29!
On the Japanese side, it is also quite hectic with faulty radars which, above all, are unable to give the altitude of the target!
The numerous testimonies cited by the author help to recreate the atmosphere of what the B-29 crews could experience.
Note: the list of American losses, by crew.
Conclusion: another fine book and congratulations to Mr. Baeza for enlightening us on what the B-29 campaign was really like against Japan, far from the clichés… © JC Carbonel / Modelstories

- Fifth opus of a dramatic and fraticide saga in the heart of the Pacific between the Doctors Follamour of the USAF and the niakwés of the country of the rising sun ... This clash between the giants of Boeing and the local mosquitoes will have serious consequences for them. two camps and this a few months before the final act ...
On the one hand, the B-29 Superfotresses not really developed and which never will be, put in the hands of certainly well-trained but totally inexperienced crews sent to break the pipe on a high-tech machine with the most capricious operating mode and on the other hand, Japanese pilots whose level is so low that they are barely able to fly but who have a very fighting spirit for them ...
The continuation of this endless and endless air battle on a Japan folded in on itself and put in defensive mode, which slows down Uncle Sam's boy's a little, but which does not stop them even if it means leaving it there a huge bundle of feathers ...
The rest is therefore illustrated with a number of unpublished photos and unfolded over the course of the story with a few texts that are cold in the back, the account of the operations being presented here in a rigorous manner with mathematical precision ... to read these stories of all of them we understand here that without the "bomb" it would have been almost impossible to bring the Japanese people to their knees without having to pay a humanly unbearable price ...  © Marc Debeer - Fleuves&Canaux

- 5th issue devoted to the use of the B-29s in the war against Japan. As there seem to be three final parts to be published, this will constitute an absolutely complete (and unique) set in French literature. This issue focuses on the period of nocturnal incendiary raids carried out under the command of General LeMay. In addition to the raids led by the B-29s (which each time engender several hundred aircraft, as on the night of March 9 to 10 with 325 B-29), the text also makes it possible to follow the reactions of the hunt and of the Japanese DCA. Whether it is the attackers or the defenders, it is clear that the expected results are not always there (despite relatively large losses) and another interest of this work is to show the weaknesses of the devices. on the one hand and the shortcomings of employment doctrines on the other.
Always so richly illustrated, a number to keep with the others.
A study written by Bernard Baéza and edited by Lela Presse. © Guerres et Conflits.