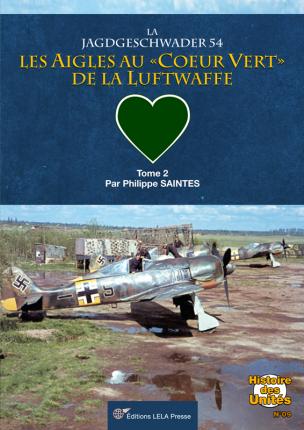 2nd part of the history of the Jagdgeschwader 54. While the fate of the war in the East was being played out at the beginning of 1943, the wing with the "Green Heart" saw its III. Gruppe removed from the sector to fight allied raids on the Western Front: duels on the English Channel to the sacrifice of Bodenplatte through the battles of the Landing in Normandy. It will become the first fighter group to fly on the Fw 190 D-9. Scattered across the eastern front, the I. II. and IV./JG 54 become "all-rounders". Despite the overwhelming air superiority of the Soviet forces, the Nowotny, Kittel, Ademeit, Rudorffer, Thyben and Broch have consistently lived up to their task. The IV./JG 54 is in turn deployed to protect the Reich at a time when the air war in Europe is on its way to its inevitable conclusion. From October 8, 1944 to the German surrender, the last Focke Wulfs of the unit supported the besieged troops in Courland. The result: a tragedy in which heroism and panache were not lacking.

336 pages, around 850 images, 30 color profiles. Tome 01 always available on the site, section History of the Units.

We talk about it on the Press and on the Net:
- Second and last installment in the form of a marching journal of a prestigious unit which was fighting from the first hour to the last minute or almost, passing from the BF-109 to the FW-190 from the western fronts to those of the is to fall back step by step into the heart of a dying and dying Third Reich ... We cannot help admiring these men on foot fighting against supernumerary and increasingly combative adversaries ...
The men of JG-54 were solitary eagles, soldiers of misfortunes grouped within an amalgam of units dispersed and scattered on all fronts ... which for the uninitiated is almost impossible to follow , from where all the interest of the titan work of the friend Philippe Sainte who reconstituted and the word is rather vague, day after day, on the basis of a mountain of documents, the courses of the components of the unit and men and the equipment used ...
For these men, every day could be the last flight, the last mission. To read from page to page this book, we get to the heart of operations, we follow changes, developments, daily battles and the few rare moments of relaxation ...
Textually it is clear and even easy to follow and therefore within the reach of the greatest number and illustration side, we border on perfection with a lot of new photos both of the devices and of the men, we are thanks to this high-flying iconography, as admitted or tolerated by the units, it is a rare privilege and an excellent tool to soak up a story that is gradually forgotten and faded over time ...
The JG-54's green heart has not stopped beating in our memory. © Marc Debeer - Fleuves & Canaux.

- All that has been said for the first volume (see above) can be re-said on this second: many extracts from memories of pilots integrated into a chronological text which itself must be derived from a March Journal unit. With an additional readability: citations from German sources are in blue-green, those from Soviet sources (rarer) in red.
The criticism concerning the absence of a chapter / appendix devoted to non-standard camouflage is renewed also especially when the rare remarks of the author on the subject would have deserved development (brilliant green camouflage p273!) Idem on the profiles which would deserve detailed legends to highlight the work of illustrator but also of researcher (for color interpretations) of Thierry Dekker. That said, criticism is easy ... see the study pages on Nowotny's "Focke-Wulf" in Luftwaffe in Focus vol. 11 !!
As in the 1st volume, at the end of each chapter, loss tables which summarize in a few pages the fights described in the texts ... and clearly show that the life of a Luftwaffe pilot is often short! One of the points that comes out forcefully from this book is the dazzling side of the life of these obscure pilots, then star of the media and buried in a piece of Russian land in a few months!
In the appendix: a list of all the identified pilots having passed through JG54.
Also note: the cards (I did not count them but they are numerous enough to allow easy tracking of unit movements).
As before, there are real "mini-reports" of several photos showing the same scene / the same camera from different angles which is significant. In addition, most of the illustrations come from private collections and are therefore unpublished (in fact we often see that an "archi-known" photo is part of a set that we have the opportunity to discover in its entirety here. .)
In conclusion: those who appreciated the first volume, will not be disappointed by this second opus which has the same qualities of quality of research, ease of reading and iconography. © Modelstories 2020

- Barely larger than the previous volume, this work of about 330 pages takes us between 1943 and the end of the war on the eastern front from Leningrad to Kursk and then on the western front in defense against the roll compressor of the soviets.
The different units of this wing will fight on BF 109 and FW 190.
This book deals very precisely with the different operations and provides an extremely important iconographic source with many details on the planes as well as very interesting views of personnel or scenes to reproduce a diorama for example. The author, who is a recognized specialist on the subject, has surrounded himself with Thierry Dekker, another specialist in color profiles.
The author has done a gigantic job of compiling documents.
The final appendix lists the pilots of this prestigious unit.
This book and THE undisputed Bible on JG 54. © Christophe Verdoux for Master194 / Smal-tracks.org / Fighters.forumactif.com.

- The continuation and end of the chronicle of JG 54 Grünherz appeared in the prolific Histoire des Unités collection of the French-speaking specialist publisher Lela Presse. Under a flexible cover like the first volume, there are 333 pages, filled with density, both in terms of text and illustrations.
Point of introduction: on the second page, the summary announces the eleven chapters, articulated both according to a double chronological frame and according to the geography of the theater of operations. Then alternate stories on the eastern front with returns on the western front, the complete transition on the Focke-Wulf 190, the first Fw 190D-9. Each chapter ends with a partial conclusion and a summary of the casualties. A general conclusion leaves room for a copious thirty-page appendix listing all the pilots, acknowledgments, sources and references and two pages of Errata from Volume 1.
More than 800 photographs, black & white and color, as well as around thirty profiles perfectly illustrate clear and precise text. The choice of different colors to differentiate the texts helps with reading: the black text, the direct testimonies of the elders or the archive documents in greenish blue, and the legends of the iconography in blue. The footnotes do not escape this colorization: they are in olive green.
The dates stand out well, Philippe Saintes' style is fluid, and given the size of the volume, the very rare shells or small faults are completely forgivable. The whole is well balanced between text and iconography. At most we can regret the absence of maps for the Eastern Front, while we have them for the return to the Western Front (North of France, Belgium - Netherlands). The iconography relates mainly to personnel, but also covers machines, places, atmospheres (meals, briefings, celebrations). It also illustrates the opponents, aviators or planes.
The human losses are gathered at the end of the chapter and not at the end of the book, which could have made these long lists indigestible. We can regret the absence of lists of victory claims. Certainly, given the record of some Experten of the JG54, and overall the estimate of 9451 victories of the "green heart" squadron from 1939 to 1945, it would have been necessary to add many pages ... Note that in the appendix is ​​the number of victories attributed to each pilot, and in the body of the text, the author often indicates the victory numbers for pilots with multiple claims, on the Russian front.
Again, a seriously researched, documented, written and illustrated work, which shows that France does not have to suffer from comparison with the Anglo-Saxon edition specialized in aviation. © Jocelyn Leclercq - AEROBIBLIOTHEQUE. (Favorite 2020).