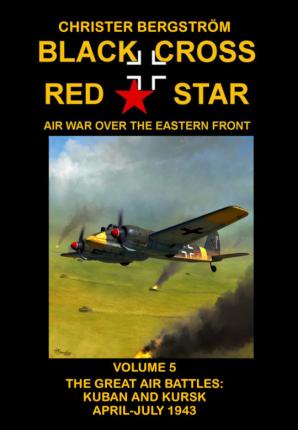 This book series is the only detailed and objective account of the epic air war over the Eastern Front during World War II.

Regarded as the standard work on the air war over the Eastern Front during World War II, Christer Bergström’s unique Black Cross/Red Star series covers the history of the air war on the Eastern Front in close detail, with the perspectives of both sides. Based on a close study of German and Russian archive material, as well as interviews with a large number of the airmen who participated in this aerial conflict, it has established itself as the main source on the air war on the Eastern Front. This volume of Black Cross Red Star deals mainly with two of the largest air battles in military history—over the Kuban Bridgehead in the spring of 1943 and during the Battle of Kursk in July 1943. These are studied in great detail, with a balance between German and Soviet sources, many first-hand accounts, and presented with the true loss figures of both sides, day by day.
The author has studied the air war over the Eastern Front for several decades. This work is based on primary sources from both sides and interviews conducted by the author with a large number of veterans from both sides.
Following the publication of Volume 5, new and heavily updated editions of volumes 1, 2 and 3 will follow, and next the subsequent volumes (vols. 6 etc.) will follow.
384 pages - Illustrated throughout, many detailed maps, aircraft color profiles.