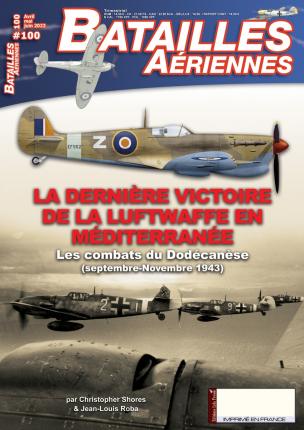 The last victory of the Luftwaffe in the Mediterranean - The Fighting in the Dodecanese (Sept-Nov. 1943)

September 1943. As the tide of the war turned increasingly against the Axis, the Italian government made a secret deal with the Allies to, supposedly, end the conflict. British Prime Minister Winston Churchill thought he had found the perfect opportunity to trigger the Accolade Plan, the capture of the Dodecanese Islands. In doing so, he hoped to tilt neutral Turkey into the Allied camp while launching a major offensive across the Balkans, this “soft underbelly of Europe”. But Churchill was by no means followed in this by his American ally and, contrary to his hopes, the Wehrmacht quickly took control of Rhodes, the most important island of the archipelago. Despite this setback, British units were engaged in an offensive that was badly started from the start (authors have called it 'Churchill's madness'). Although caught off guard, the Wehrmacht scraped its drawers and urgently dispatched Luftwaffe detachments and an airborne regiment to the Aegean Sea. At the end of 1943, the belligerents were going to 'reenact' the 'Merkur' operation of May 1941 (the capture of Crete): the Germans dominating the sky while the British were the masters of the sea. During two rapid landings but costly, the islands of Cos and then Leros were taken back from the British. This was the last great victory of the Wehrmacht with the capitulation in open country of a British army and the capture of its general. A military episode too often overlooked by historians and chroniclers despite its important underlying political aspects.

The set is illustrated by 191 photos, 2 maps and 15 color profiles.

We talk about it in the press and on the net:

A very original subject, these air battles in the northeast of the Mediterranean, very little discussed so far. A map with French names would have helped readers unfamiliar with the small Greek islands.
The adversaries are mainly the Germans and the English with some American incursions.
Moreover, despite the Spitfires and Bf109s in the cover, in fact it is mainly seaplanes on one side (Arado Ar196) and heavy fighters doing "anti-shipping" (Beaufighter) on the other side.
The iconography is very rich as usual:

A work that allows you to discover an unknown front and which should therefore be of interest to all amateurs. © Modelstories