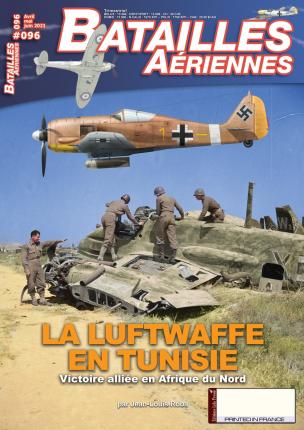 From 1940 to the end of 1942, Tunisians had seen few Luftwaffe planes other than the few aircraft of the Armistice Commission that had come to verify compliance with the conditions set in June 1940 in Compiègne. Everything changed in November 1942 when Anglo-Saxon forces landed in Algeria and Morocco, taking the Afrika Korps (then in full retreat) in pincers. Gathering all they could, the Wehrmacht urgently dispatched disparate units of land, air or sea to take control of Tunisia, a small place to which Rommel's army was flowing. On the ground, the Heer was initially able to block the advance of the opposing forces while, in the air, the Luftwaffe multiplied the actions of all kinds: fighter fights, escort of bombers, ground attacks, reconnaissance but also refueling following the creation. of an air bridge linking Europe to Africa. Airborne units and the Flak (DCA) were also involved. However, even if the German fighters cut croupiers to their adversaries (among others to a Usaaf lacking at that time of combat experience), they very often appeared helpless in the face of the armadas of American heavy bombers coming to bludgeon their airfields as well as the concentrations of troops. The Luftwaffe, confronted with sophisticated enemy material, would then discover at its expense what the "Materialschlacht" was. As the months went by, the Allied numerical superiority growing stronger, fatal blows were dealt to the air and sea supply units; which isolated the Tunisian redoubt. Despite the disproportionate amount of fighting, the Axis was able to hold its own in the country for some six months, but its positions slowly dwindled. And, on May 13, 1943, after suffering severe cuts, the German-Italian forces definitively lost Africa.

- A solid study by Jean-Louis Roba on a generally little covered aspect of operations in North Africa. In addition to the many works on Rommel and the Afrika Korps, some solid studies on the Italian army, here is almost 100 pages the approach by the third dimension with the contribution of the Luftwaffe to the campaign after the Anglo landings. -saxon in Morocco and Algeria, initially with resources mainly from Sicily and Greece. Besides the details of the squadrons' engagements (13 units based in Tunisia from December 1942), the author also presents the action of the German paratroopers, often forgotten on this front. Beyond that, we have the feeling that the local population is rather favorable to the Germans ...
We appreciate the many original photos that support the current text. A reference number. ©Blog Guerres et conflits.

- After Japan and the B-29s, this issue brings us closer to home, to North Africa between November 1942 and May 1943. November 1942, the Allies land in Morocco and Algeria, taking the German forces by surprise: this what this issue tells is the reaction of the Axis air forces, day to day with in particular all the effort to reinforce ground troops through an airlift using Junkers Ju 52 and Messerchmitt Me 323. But it would be a mistake to sum it up to that because there is naturally the aerial cover by the fighter JG 51 and 53, the efforts of the reconnaissance devices (Bf 109, Bf 110, Me 210, Ju 88 ...) and the setting in motion. action of substantial ground attack forces on Fw 190 and Hs 129.
Conclusion: a good "Air Battles" very classic in both form and content (many interviews or extracts from prisoner interrogation reports etc ...) © Modelstories 2021