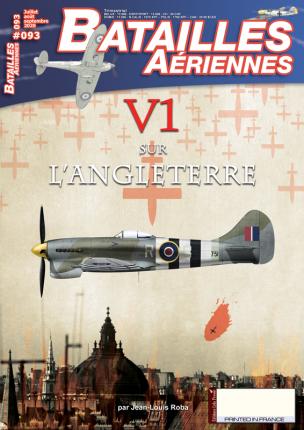 In mid-June 1944, when the Normandy Landings had taken place ten days earlier, the first V1s (the 'flying bombs') hit English soil to the chagrin of many British strategists who had optimistically announced the near fall of the Reich while minimizing the danger of 'new weapons'. A panic ensued among the English population, panic which would sometimes turn into paranoia. Although loss of life and damage to property remained limited, the defense services of Great Britain were then forced to maintain in England a large number of AAA batteries and to hire hunters of all types (Spitfire, Tempest, Black Widow, Meteor and even Typhoon) to counter this new and unexpected peril. Fighter pilots of all nationalities (British, Canadian, New Zealand, French, Belgian and even ... Swedish) were engaged against these ‘Miscellaneous’ (the nickname given to the V1), several losing their lives during these risky missions. Despite the dangers involved, their actions were too often overlooked. This book describes their battles against "robots".