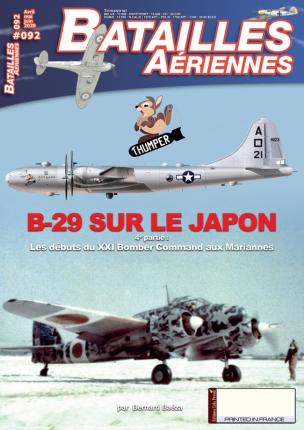 This 4th episode of the B29 series on Japan perfectly illustrates the adage "with the same causes, the same effects". To the chagrin of the American high command, the replacement of Brigadier-General Hansell by Major-General LeMay, "Le fonceur", who revitalized the actor of the XX Bomber Command on the China-Burma-India front, does not translate into no improvement in terms of the XXI Bomber Command.

From the end of January, the date of his assumption of office, to the beginning of March 1945, Curtis LeMay was faced with the same insoluble problem as his predecessor until the solution was blown to him by the General Staff of the 314th Bomb Wing.
In the opposing camp, the ineffectiveness of daytime raids at high altitude is naturally attributed to the action of these hunters of Bōeï Soshireïbu when it is not the case.
As in previous volumes, the author lists the raids of the XXI Bomber Command, in chronological order, always with the same attention to detail and without omitting the Japanese point of view.
Fans of Imperial aviation will find attached a presentation of the hunting groups of the army and the navy specifically assigned to the fight against the B29.

Editorial:
Here is the fourth part of the great work that Bernard Baéza has prepared on the action of the “Super Fortress” on Japan. Contrary to what many thought (and still think), these bombings were not easy for the Americans. We were able to discover all the very particular difficulties imposed by these raids and in particular that of the unreliability of the engines of the B-29. Despite very advanced technology and great efforts, the engine manufacturer was unable to completely resolve this problem. And when we discover the list of victims due to this single avatar, we wonder how the crews still could not be discouraged and above all, how the command could accept that such a situation persists. The situation will gradually improve but this engine concern will remain, like a sword of Damocles, in the minds of the crews taking off from the Marianas aboard the B-29s.
Japanese civilians expected the worst and they would have it soon after: their "cities of wood and paper" will suffer terrible damage, starting with the capital, Tokyo, whose entire neighborhoods will be razed. If at the outset it was necessary to destroy the industrial objectives, the savagery undergone by the American forces in the various combats of this Pacific war will convince the American command to attack Japan, the whole Japanese nation! It will now be much less difficult to drop the bombs on the large territories of Japanese cities than on factories or other industrial complexes scattered near large cities.
As you may have noticed, despite the Covid-19, Lela Presse decided to continue the work and to sell its magazines. It is a risky bet given the increasingly restrictive containment measures. But it was difficult for us to do otherwise since two out of three of the magazines were in print, as well as one special issue of Planes. So we can only count on the obstinacy of our readers to keep these sales going. Otherwise, we will have to put our activity to sleep for the time necessary. So do not be discouraged and above all, be well, do not take any risks! Good reading. Michel Ledet.

We talk about BA92 in the press and on the web:
- During the hunting season for the Americans & co, the Marianas were a kind of Japanese pigeon shooting range, balltrap version for Hellcat, on the Japanese side after an express empty passage and in view of the arrival of the B-29s it was a shooting "with the big turkey" using it is true quite questionable hunting techniques but well in the local samurai spirit ... Banzaï Banzaï ... which translates for USAAF that thankgiving had a little nightmare air in the kitchen...
Bernard Baéza gives us here the fourth installment of the saga on superfortress against the jap's, not very pleasing for the crews who in addition to a very tough opponent had to face significant technical problems encountered by B-29 not very developed and basically, not really reliable, planes projected in a most hostile environment that is ...
The results are quite mixed and it is therefore the course of these events that you will find in this n ° 92 of Air Battles ... with besides the stories and details of the missions, quantity of unpublished documents on the planes and the crews which for some had done tours of operations in Europe ... Poignant and moving that the stories of crews thrown into a storm not so peaceful as that! ... © Marc Debeer -  Fleuves & Canaux.

- 4th episode, subtitled: the beginnings of the XXI Bomber Command in the Marianas.
This series definitely contributes to “breaking the myth” of both the B-29 “marvels of technology” and the courageous “wild eagles” of Japanese defense. The Americans continue to face the weather (winter now) with as much difficulty, the engine failures and other technological problems of the B-29 while the Japanese are just as bothered by the weather (some missions where the Americans, not seeing the target because of the clouds aim at the radar and set aside while the Japanese, also because of weather cannot take off). The Japanese, moreover, still have great difficulty in reaching the flight altitude of the B-29s and therefore put into service many aircraft with oblique cannons (which seem effective) or put into operation light aircraft, without shielding and all maneuverable at these heights (the Ki 61 at 10,000 m seems quite "stiff" according to testimony ... we are far from the A6M2 or Ki 43 of 1942 twirling around the Allied planes) which end up hitting more or less voluntarily the B-29 ... with mixed success (the engines of the B-29 are not up to par, but in view of the photos published here, the cell, it knows how to cash and two engines torn off, even on the same side, does not prevent the Super-Fortress from coming home. Those who seem not to be up to the task, in view of the "immensity of the Pacific", are rescue at sea and there are countless testimonies of B-29 disappeared without a trace…
The last 15 pages are devoted to brief histories of Japanese units who found themselves having to "kill the dragons" (B-29) with plates of tail badges.
Conclusion: this 4th episode is fully in line with the expectations of this series with many twists and turns… © Modelstories 2020