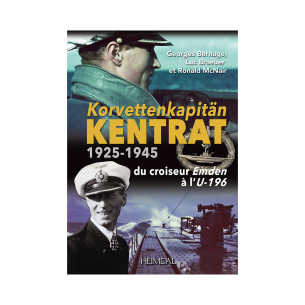 We have collected all the archives of the Korvettenkapitän Kentrat and we are going to offer you an exceptional color album dedicated to the career of this great sailor with more than 500 photos and documents. Born in 1906 in Moselle, he entered the Reichsmarine in October 1925 as a simple sailor and quickly became an officer. We follow him, in all these periods with photos, during his two-year cruise on Emden, Hessen, during the war in Spain, on Deutschland (attacked by the Soviets), Schlesien. In 1939, he joined the U-Boote, on the U-25, then commanded the U-8 from May 1940, then the U-74, with which he saved three castaways from the Bismarck. He received the Ritterkreuz in December 1941. He took command of U196 in September 1942 with which he carried out the longest mission of a UBoot, 225 days at sea, returning to Bordeaux on October 23, 1943. In September 1944, he was assigned to the Kriegsmarine naval base in Kobe, Japan, until the end of the war. We then find him rubbing shoulders with former Admiral Dönitz in post-war friendships. He died on January 9, 1974.
This album presents a rich iconography largely captioned by him, including 130 photos concerning U-196 and twelve exceptional vintage color photos (with his dog Polo, returning from a mission from U-196, the sub -sailor on the high seas), documents, and personal items.
It is a book never before seen in its presentation, where we find step by step the cruise of this great sailor through his personal documents, the letters he wrote to his parents during his stopovers, his uniforms, etc. .