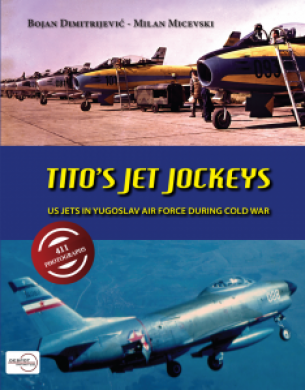 Tito’s Jet Jockeys, US Jets in Yugoslav Air Force During Cold War, is the monograph which describes the arguably most intensive almost Golden age of the Yugoslav Air Force. It became after the Tito’s clash with the Stalin in 1948, which expulsed Yugoslavia from Socialist lager, and renewal of the good relations with its former Second World War allies now core NATO states. After joining the Mutual Defence Aid Programme in late 1951, Yugoslavia started to receive contemporary or modern types of warplanes. Since March 1953 to late 1957, Yugoslav Air Force has received a total of 257 US Jets. Later, through commercial purchases, the number of the US Jets reached over 600 examples that soldiered in the YAF until mid-1970s and provided its backbone and unique Cold War experience.
The book was written upon the declassified archival sources that are kept in Military Archive and YAF Museum in Belgrade, coupled with numerous interviews that authors gathered in many years. It featured some 380 photos, many of them never seen so far. Finally, it was titled upon the way how the American observers called Yugoslav pilots during the training in USAFE bases in Europe 1952-1953.