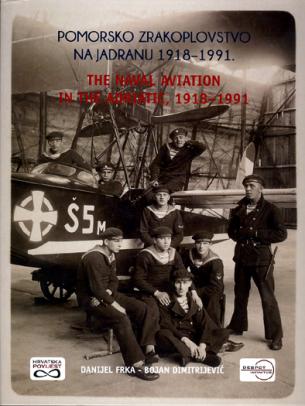 In the era of the globalization and social networks, the average users are able to easily access countless historical data from various archives and institutions by pressing a few keys on the keyboard of the computer. The rich and prosperous countries had most of their archives digitalized, making their contents available to the widest public in a matter of seconds. However, the book, being the oldest means for the data storing, is still available and is being used despite the obvious advantages of the digital aids. As the authors, we have decided to publish our research on one part of our aeronautical history, and that is how the book on the naval aviation history in the Adriatic was born.
In our book, we have tried to describe the history of the naval aviation from the end of the World War I, through the birth of the State of Serbs, Croats and Slovenians, the Kingdom of Yugoslavia, until 1991, the year of the disintegration of the SFR Yugoslavia.
The book describes the birth of the Naval Air Force after the end of the World War, and its growth in the period between the wars. At that time, the Naval Air Force was still searching its best development concept. This was the time of the birth of the national aircraft industry, which, although modest in comparison to the developed countries, created several types of seaplanes that were in line with the modern European designs. However, the development was not easy, so the Navy Command had to search for the foreign types of aircrafts. And, while some types proved to be very successful (Dornier Do JWal), the others were a complete failure, and earned a bad reputation (Dornier DoD). The book abounds in the technical descriptions of all kinds of seaplanes, and a special part is dedicated to the April war in 1941 and the activities of the Yugoslav seaplane squadron within the RAF in Egypt 1941-42, as well as the only seaplane (Fleet) in the Tito’s Partisan forces in 1943.
Finally, there is a detailed account given about the post-WWII development of the AF units, that performed the tasks and duties to protect the vast area of the Adriatic coast. This chapter closes with the last years of the nineties of the past century, describing the last actions of the helicopter units of the Yugoslav Air Force, before the disintegration of Yugoslavia.
A specially valuable part of this book is a large number of previously unpublished photographs, which testify to the intensive and dynamic development of the naval aviation on the Eastern Adriatic coast. It contains more than sixty color profiles of the seaplanes and the helicopters which describe their development during the seven decades of their existence, as well as their colours, camouflage and markings. And finally, numerous appendices in the form of tables and lists serve as the useful addition to the material introduced in the book.