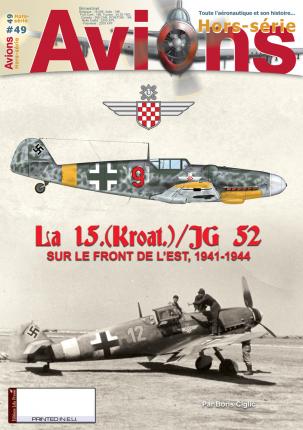 When the troops of the Third Reich invaded the USSR in June 1941, the allies of Germany also sent troops to show their goodwill towards the "cause". Croatia, a young state created on the ruins of the Kingdom of Yugoslavia, establishes the Croatian Legion whose 4th Hunting Group will become 15. (kroat.) / JG 52. Unit integrated into the Luftwaffe, this fighter squadron goes fight for almost four years, and in sometimes precarious conditions, the Soviet air force. From these battles will be born aces and heroes; many will die, others will desert. This narrative tells the story of the rich history of this unit, the author having consulted the Croatian archives but also those of the Soviet aviation. He thus gives us his work in this Hors-Série Avions n ° 49. The photographs are abundant and supplemented by about twenty profiles color of O. Petrovic.

NEWSPAPER :
In the spring of 1941, in order to lend a helping hand to its Italian allies stuck in the Greek campaign, Germany entered Yugoslavia on April 6, quickly provoking the capitulation and the fragmentation of this very unified country. This fragmentation saw the creation of a Croatian state supported by Germany. During the invasion of the USSR, the Croatian president Ante Pavelic undertook to support the Germans by providing combat units including an air element formed at the beginning of July 1941. Thus the fourth hunting group was integrated into the Luftwaffe becoming the 15. (Kroat.) / JG 52. The unit then fought against Soviet aviation for almost four years in sometimes difficult conditions, ending the conflict in sometimes inglorious conditions with desertions and some ending as infantrymen . But in total some 5000 war missions were carried out with an honorable record.
This special issue chronologically traces the entire history of this formation. The author, a member of the Yugoslav historical research group attached to the Belgrade Museum, has already published several works on the time. He exploited the Croatian and Soviet archives, and sought pilots and descendants to publish their testimonies. The result, a rich and precise text but pleasant to read. The iconography is up to par because, in addition to official photos, it also includes images from personal memories, hitherto unpublished. About twenty O profiles. Petrovic, of good quality, show the different liveries of the Bf 109. In annex a correspondence of the grades, a map of the bases, losses of the unit and claims of voctoires.
This is an important booklet on an original subject, complementing the superb work on Croatian aviation published in 2000.
J.-L. FOUQUET - for Cocardes.