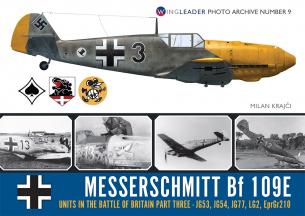 This book is the third and final part of our Wingleader Photo Archive series devoted to Bf 109 Units in the Battle of Britain.  It covers JG53, JG54, JG77, LG2 and EprGr210.

These books are slightly different to the usual WPA books in that they concentrate on the units rather than the history of the aircraft itself.

The aim of these books is to help the reader identify and understand the various styles of camouflage and markings used by the Bf 109 units during the Battle.  Some had large numerals, some small, some had heavily mottled sides, others pale blue.  Some had emblems and some carried both the Gruppe and Staffel emblems at the same time.

At the back of this book is a handy two page guide to all Unit emblems carried by Bf 109s during the Battle of Britain.