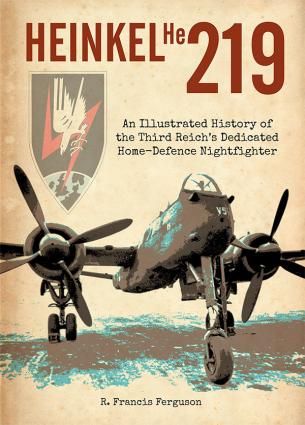 The Heinkel He 219. An Illustrated History of the Third Reich’s Dedicated Home-Defence Nightfighter

The He 219 was in many respects unique. It was the world’s first series-built aircraft to be fitted as standard with an ejection seat – and not just one seat, but two. It was also unique in that it was designed and built as a dedicated nightfighter for home-defence duties. This came at a time when the prevailing military mind-set was almost exclusively fixed on the offensive role of aircraft. And, because of this mind-set, the He 219 was plagued by uncertainties that affected production and development. The He 219 was also unique for its tricycle undercarriage which came at a time when tail-draggers were common. Sometimes likened to a praying mantis, the very look of the He 219 with its nose-mounted dipoles gave just a small hint of its fearsome reputation in the night air war over continental Europe. In May 1940 RAF Bomber Command took the decision to go over to the strategic night bombing of Germany. The later introduction of four-engined heavies, the Stirling, Halifax and Lancaster, into Bomber Command operations saw an increase in the frequency and intensity of bombing raids. The Heinkel He 219 with its heavy firepower was quickly rushed into frontline service but like so many weapons of the time it came too late, and in insufficient numbers, to change the course of the conflict.