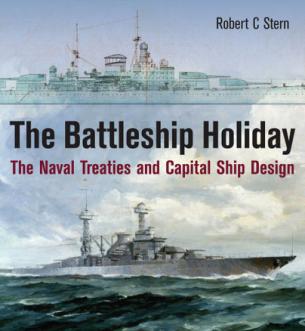 The Battleship Holiday. The Naval Treaties and Capital Ship Design.

Even as the First World War was ending the victorious great powers were already embarked on a potentially ruinous new naval race, competing to incorporate the wartime lessons and technology into ever-larger and costlier capital ships – still seen as the ultimate arbiters of sea power. This competition was curtailed by the Washington naval treaty of 1922, which effectively banned the construction of such ships for years to come, and mandated the scrapping of those under construction. This ‘holiday’ was to have profound effects on design when battleship building was renewed in the 1930s, as later international agreements continued to restrict size and firepower.

This book investigates the implications of these treaties on technical developments, contrasting the post-war generation of ships that were never completed – or never even ordered – with the new designs of the 1930s, revealing just how much progress had been made in areas like fire control and armour despite the hiatus. An analysis of how well these modern ships stood the test of war concludes this intriguing and original contribution to the literature – a book that is certain to fascinate anyone interested in the final era of the big-gun at sea.