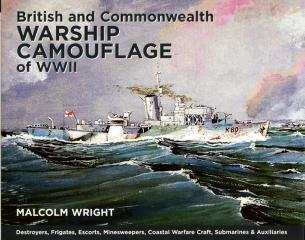 During the Second World War navies developed low visibility camouflage for their ships, on both the vertical and horizontal surfaces, in order reduce visibility by blending in with the sea, or confuse the identity of a ship by applying more obtrusive patters. In this new book by maritime artist Mal Wright both the official and unofficial paint schemes that adorned ships of the Royal Navy and Commonwealth are depicted in detail, along with discussion on changes of armament and electronics that effected the outward appearance of each ship.

Starting with destroyers from WW1 still in service during WW2, the book progressively covers ships below cruisers, class by class, to provide a detailed and easy-to-use guide to paint schemes in use. In some cases individual ships are shown in the several schemes they wore thus providing a source that covers various periods of service. With 740 full colour illustrations, all of named vessels, this book concentrates information into a single volume to provide a one-stop reference source, and, for the first time in a single volume, it covers not just the well-known ships, but also escort vessels, minesweepers, trawlers, coastal craft and auxiliaries in sequential format.

Many schemes would be difficult for the reader to have found other than with the most intensive research so that historians, collectors, modelmakers and wargamers will find this unique reference source absolutely invaluable.