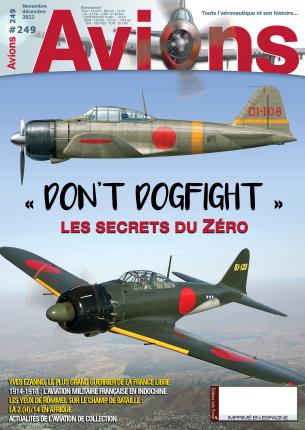 In this issue, we offer you an exceptional article that Bernard Baëza, undisputed specialist in Japanese aviation during the Second World War, devoted to a legend of aviation: the Mitsubishi Zero fighter, terror of the Pacific in 1941 and 1942. article that will interest both history and video game enthusiasts given the amount of comparative information it contains between the Zero and the Allied fighters! French aviation enthusiasts are not forgotten, however, with the end of the biography of Yves Ezanno, who has been rightly nicknamed "the greatest warrior of Free France", and the complete history of the French aviation in Indochina in 1914-1918, fully revised and expanded version of the chapter dealing with this period in the book "French aviation in Indochina from origins to 1945" published in 2012. Fans of exoticism can continue to enjoy with the adventures of the Luftwaffe's 2.(H)/14 close reconnaissance squadron, which fought in Africa practically non-stop from 1941 to 1943; throughout this period it was of paramount importance in informing the Afrika Korps of General Rommel, the "fox of the desert". With some news very related to storks, here are hours of reading in perspective!