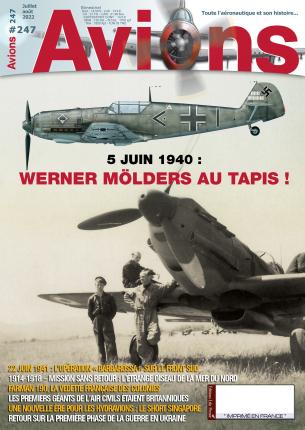 June 5, 1940: Mölders on the carpet!
One of the most famous battles of the Battle of France revisited
It is an exceptional testimony that we offer you in this issue thanks to the memories that General Henri Hugo had kindly entrusted to us in February 1994, two years before his death. Exceptional, because the ace of 39-40 had never before wished to express himself on this fight of which he was one of the main protagonists as leader of the patrol which shot down the famous German ace Werner Mölders. The confrontation had indeed left him with a bitter taste because it had cost him four teammates… His impartial analysis of the circumstances highlights all the more the new elements that we have gathered for you.

As for the LELA Presse publications, I would like to point out that LES AILES n° 5 (whose main subject is strategic reconnaissance in 1940, with a history of the GR I/52) has just been published at the same time as this 247th issue of AVIONS . And yes, the two magazines will now be published simultaneously: six issues per year for AVIONS, four for LES AILES, which is quarterly. Number 101 of Air Battles, devoted to the Luftwaffe in Italy from 1943 to 1945, will be released on newsstands on July 22 with a maximum of unpublished documents. And although it is not aviation, you should also know that the large book on the coastal escorts of the French Navy has appeared in the collection Navires & Histoire du Monde n° 38... Nearly 450 pages and 800 photos to know everything of the 57 buildings which, from 1944, made it possible to safeguard the French maritime heritage until the wars in Indochina, Algeria and beyond. Good readings in perspective throughout the summer!