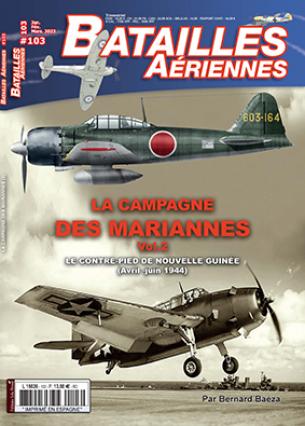 This number 103 of Air Battles is the logical continuation of 102, the two numbers constituting the first stage of the offensive of the Battle of the Marianas by what will become the imposing American naval air force. Its planes, all its ships, will literally "sweep" (and rid) the Pacific of all Japanese opposition throughout the (capital) year 1944. We do not measure this power enough. But if we know that while carrying out the imposing landing of June 6, 1944 in Normandy, the United States were preparing to fight the no less imposing naval air battle of the Marianas, implementing some 900 planes which, from the carriers planes, will crush the Japanese naval air force, one can then better imagine the American industrial power, a little more than two years (only) after the disaster of Pearl Harbor. We then understand all the Japanese recklessness to have engaged in this conflict.

While wishing you a good reading of this second part of the Battle of the Marianas (which, according to the author, should have six or seven), allow me to wish you a happy new year 2023, emphasizing health, our most valuable asset!