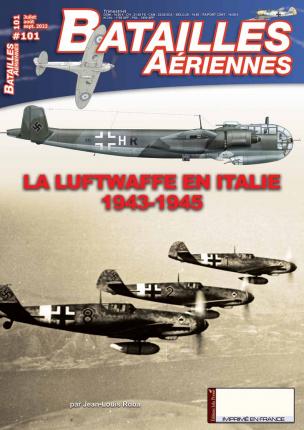 During the Second World War, the Luftwaffe operating in Italy, a country allied to the Reich, depended in theory on the Italian Regia Aeronautica. It was actually a figment of the imagination due to deficiencies in Italian military aviation. And it is therefore on a regular basis that the German strategists guided the transalpine units which had become by force of circumstance auxiliaries (if not auxiliaries) of the Wehrmacht. From 1940 to 1942, Italy constituted above all a base of operations for the German air force engaged in raids on Malta or Africa. After the loss of Tunisia in May 1943, Sicily and the Italian mainland found themselves in the front line, becoming real war territories. The Reich then began to be wary of its unstable ally fearing an invasion of his country. After the hard battles in Sicily, the Luftwaffe retreated into the Italian boot, fighting step by step. On September 8, 1943, Italy changed sides and the German air force had a lot to do to disarm the units of the former ally and recover the equipment of the Regia Aeronautica. This while fighting defensively against a vastly outnumbered opponent. Despite this total numerical inferiority, the German airmen were able to withstand various shocks: Salerno, Anzio, the battles of Cassino... although their numbers in men and aircraft were continually dwindling. From time to time, some 'offensive' detachments (LG 1, JG 2, KG 76,...) could be distracted towards the Italian front but they only remained for a short time. Rome fell on June 5, 1944 into Allied hands. This real success was nevertheless eclipsed by the announcement the day after of the Allied landings in France. From now on, the French fronts (Normandy, Provence) were going to drain all the attention as well as almost all the potential of the Luftwaffe present in the south and the west of Europe. Thus remained in northern Italy only a few German reconnaissance or ground support units operating in favor of ground troops only. Fighting one against ten, then one against a hundred, the remnants of the Luftwaffe were forced to fall back definitively on the defensive. The attempt to equip the air units of the RSI with German equipment to compensate for the lack of manpower was a failure and, by May 1945, the Luftwaffe was nothing more than a trickle in the Italian peninsula.
J. Louis Roba.