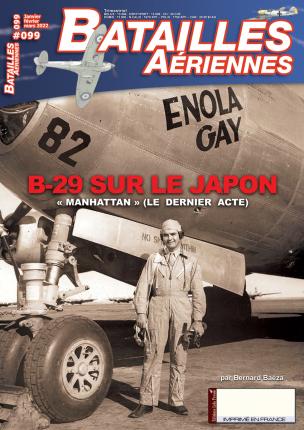 In the summer of 1945, the action carried out by the 20th Air Force and more precisely the XXI Bomber Command for eight months (precision bombings, incendiary raids, operation "Starvation" and plan "Empire") bore fruit and annihilated the military-industrial capacities of the Japanese archipelago. To draw a parallel with the Noble Art, Japan finds itself from the beginning of July in the situation of the "technical knockout" boxer with a knee on the ground but who prefers to continue taking hits rather than throwing in the towel. . With a weakened hunting and deliberately nailed to the ground while awaiting the landings which they know to be inevitable and with radars and a DCA which never really worried the adversary, the Japanese are reduced to watching the B-29s survey. their airspace by the hundreds, day and night, but with no apparent desire for surrender ... This observation will result in the decision to use atomic weapons, the culmination of the “Manhattan” project. It is this part of the strategic campaign of the 20th Air Force that relates this 8th and last opus of the saga "B-29 on Japan", parallel to the last raids of the "Empire" plan and the specific role of the 315th Bomb Wing which some will say that it consisted only of "shooting a dead horse". Researchers and other detail freaks will find in the appendix the exhaustive list (with numbering, nickname and fate of the devices) of all the B-29s used during the campaign, the official list of the operations of the XX and XXI Bomber Commands and a study on the fate of aviators prisoners of war.

We talk about it in the press and on the net:

Last episode of the long saga of the B-29s over Japan: this time it's the atomic sequence!
The author of course deals with the two missions on Hiroshima and Nagasaki...but do not forget that during this time the war continues with classic bombing missions...during which the risks of going to the mat (or à la baile) still exist...to the great misfortune of the crews. Even on the Japanese side, some interception attempts occur.
In addition to the “told” part of the story, there are also 22 pages of appendices that cannot be forgotten because they are precious:
· Annex 1 Prisoner airmen and war crimes: details based on the Yokohama trial (equivalent to that of Nuremberg for the Pacific front) of this subject often passed under the carpet or on the contrary given as an example of Japanese barbarism.
Appendix 2 List of 20th Air Force "combat missions"
The iconography, important for the designers: the B-29 is king in this issue, by force of circumstance, the Japanese forces being at the end of the end...
61 vintage B/W photos of B-29
9 vintage B/W photos of various American aircraft
7 vintage B/W photos of various Japanese aircraft
14 vintage color photos of B-29
7 photos of various nuclear bombs
Many aerial views and ambient views
16 color profiles
Note among the atmospheric photos, several street views of Hiroshima and Nagasaki during the 1930s
Conclusion: beautiful end to this long saga!. ©Modelstory 2022