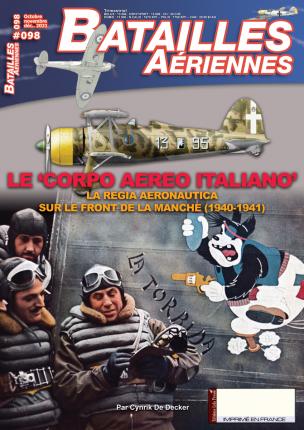 EDITORIAL
It is with great pleasure that we publish this issue. It breaks the course of the long B-29 saga on Japan (last part in the next issue) but above all it constitutes an unknown and unique episode of the famous Battle of Britain. Mussolini, who did not want to remain in the shadow of a then triumphant Führer, in fact sent a large contingent of his Regia Aeronautica to Belgium to fight the British. But, playing decidedly bad luck, the Italians could hardly shine in this predominantly gray sky of northern Europe. And for good reason: planes largely old-fashioned, poorly equipped, personnel unprepared for harsh climatic conditions. It didn't take much more to turn the adventure into a bitter failure! The propaganda was of course able to glorify the action of the Italian aviators and turn it into success, but the results obtained were almost nil since no British aircraft fell victim to the hunters of the Duce! On the contrary, the Italian losses were heavy. This sword-stroke brought to light the shortcomings of Regia Aeronautica, which was largely unsuited to modern conflict. This does not detract from the quality and courage of the Italian airmen who suffered the situation. We hope you enjoy the work of Cynrik de Decker.

- After the endless (but fascinating) adventures of the B-29s on Japan (this theme would have deserved a hardcover book….) Here is a unique issue devoted to a narrow subject: the Italian engagement in the Battle of Britain. Little known subject (except model makers who will remember the CR-42 Revell and the G-50 Airfix) which deserved to be recalled in the memories of aviation enthusiasts ... even if the successes were not there and Mussolini's propaganda operation was cut short.
It is the iconography that interests them, so we can see in this booklet:
- 185 vintage B / W photos
- 10 vintage color photos
- 5 modern color photos of restored CR-42s
- 18 color profiles, most often accompanied by “convincing photos” (note on page 20 a profile of a curious Fiat CR-42 speckled in green on a pale blue-green background, reminiscent of the decoration offered for the Revell kit. .but without explanation which is a shame because it is the only one in the book offered with this color scheme, all the others being traditional green on a sand background)
Material question we find a Ju 52 (Italian), Fiat CR-42, CANT Z.1007 bis, Fiat BR20M, Fiat G.50, Caproni CA.133T, an SM 79 (racing), 3 Hurricane (RAF), a Do17Z and some Bf109 E (Teutons these last two), a Fokker G-1A (Teutonized).
Due to the originality of the subject and the quality of the treatment, an issue not to be missed. © Modelstories 2021