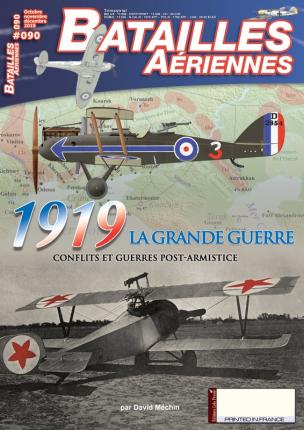 1919 - The Great War. Conflicts and Post-Armistice Wars. Out of print !

Despite our many controls, some of the text has been forgotten in this N ° 90. Here is PDF2 the missing part on page 76.

EDITO: Here is finally this issue of Air Battles dedicated to the aftermath of the First World War, seen through air battles of course. Many of us are unaware of these "suites", so little publicized but could it be otherwise when the French had just suffered the worst wars in their history? We can easily forgive them for not having opened their eyes to contemplate what was happening outside the borders of France. However, a hundred years later, the time has come to look into these conflicts, although minor, but which allowed two countries to assert themselves as nations, Poland and Turkey, in conflicts in which aviation played a vital role. These conflicts, in their political aspect, often blocked the great fear of the time: communism, with the help of the Allies who did not hesitate to send troops and equipment where the danger was clear. Thus, on the smoking ruins of the central empires, new countries were created, sometimes after centuries of submission but for a short period because as incredible as it may seem, despite the "butchery" of four years, a new conflict was to erupt twenty years later, even more terrible, emanating from a frenzied nationalism that engendered a dictatorship that is not will express only by pure force. The twenties and thirties were the decades nationalisms; the result was disastrous, as we know ...
Happy reading and welcome back to all,
Michel Ledet.

- I would like to congratulate you on the issues of Air Battles devoted to the First World War. The confinement allowed me to devote a little more time to reading my favorite magazines of which you are a part.
Not being particularly focused on this period in the history of aviation, I let myself be taken from reading the issue devoted to 1914 and I continue. What a good idea, too, to dedicate a number to the 1919 study. In addition to considerable documentary and iconographic research, David Méchin produced a particularly well-written synthesis, accessible and pleasant to read. It is for me, I dare say a revelation, the development of aviation at that time rests only on a few pioneers (manufacturers, pilots, military and political leaders). Which gives it in my point of view a more human aspect.
The result of all this is that I will put my nose (and especially my eyes!) In writings devoted to airplanes of this period. R. GAND.