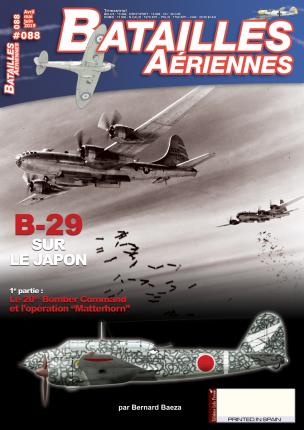 Launched in 1938 when the risk of war in Europe begins to emerge, the "B-29" project represents the most expensive American arms program of the second world war, surpassing the "Manhattan" project of more than one billion of dollars. The use of the resulting Boeing B-29 "Super Bomber" was decided in January 1943 at the Casablanca Conference, but it was held in Quebec (meeting of the Anglo-American staffs), in August of the same year. same year, which sets its first theater of operations: the China-Burma-India front. President Roosevelt is not impatient to hit the Japanese Empire. He also has the idea of ??satisfying and relieving the Chinese ally by providing him with help that, on paper, seems impressive. He wants to engage the B-29 in January 1944 but the many difficulties that will be worth in the first campaign of B-29 the name of operation "Matterhorn" (a mountain of California particularly difficult to climb) delay in June the first operations military. Therefore, XX Bomber Command, the first user of the "Superfortress" (official nickname of the Boeing B-29), will be faced with two major difficulties, otherwise more troublesome than the Japanese enemy: logistics and mechanics ... This issue of "Air Battles" brings to life, in chronological order, all the operations of the 58th Bomb Wing, the only wing of XX Bomber Command, with the analysis of events and lists of casualties on both sides. These operations are abundantly illustrated with photos most often unpublished and embellished with many testimonials. They end in March 1945 when at the request of General Henry "Hap" Arnold, "boss" of the US Air Force and himself direct head of the 20th Air Force, the XX Bomber Command is dissolved in favor of the XXI, tool the real bombing campaign of Japan, started in November 1944 from the Mariana Islands. This issue (in two episodes), like the upcoming ones on the XXI Bomber Command's operations, will delight both operational history buffs and modellers alike.