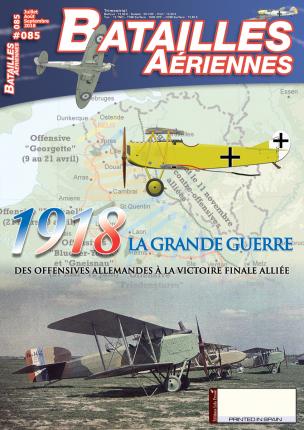 1918 - THE GREAT WAR. From German offensives to Allied final victory. Out of print !

EDITO:
You have in your hands the fifth issue of Air Battles dedicated to the air battles of the First World War.
Although it is a bit early to do so, we can now inform our readers that the results are far from negative for this series. We had some fears about the welcome you could give him but finally, without reaching those numbers dedicated to the Second World War, sales have continued to grow. Some readers, who were totally unaware of the story of the air battles of this conflict, thanked us for making them discover this. So it is very encouraging because this story is very rich and too often ignored in our country while at the time, the French aviation was the most powerful in the world! What about the hunters Nieuport, Hanriot and Spad or Breguet XIV bombers that equipped not only French squadrons but were widely exported to equip those of our allies. The French aeronautics industry was able to mass-build many models and meet the needs of our units. The technological advances were enormous when comparing the models in service in 1914 with those of 1918 and allowed civil aviation to develop after the war. All this is largely ignored and forgotten in our country; we have therefore modestly tried to remind our readers of the course of "14-18" in the sky.
This also encourages us to provide other numbers that will detail the aerial combat over the battlefields of Verdun or the Chemin des Dames (among others), the Somme. David Méchin is preparing a sequel to this issue dedicated to 1918. Indeed, the "peace" generated many conflicts in Europe, as the upheavals were important. New countries were created at the expense of the vanquished powers, which did not always happen in the best conditions. Aviation took an active part in these various conflicts, so it will be an opportunity to discover the air battles that took place in the skies of Europe after the armistice of 1918. See you in a year.
Happy reading to all and great summer, whether you go on vacation or not! And do not forget to take a look at the new books in presale, one of which is devoted to the Voisin airplanes, a unique subject handled by Henri Lacaze (Les planes Morane-Saulnier, Les Avions Breguet). From these presales, depends the publication. Michel Ledet.

TO THE SUMMARY OF THIS N ° 85:
Introduction
Chapter 1: industrial war, four against one against Germany
Chapter 2: the naval air war is already won
Chapter 3: Strategic or tactical bombing?
Chapter 4: German offensives are contained
Chapter 5: Reflux
Chapter 6: Breakthrough on the Eastern Front
Chapter 7: Turkey asks thanks
Chapter 8: Victory in Italy
Conclusion.