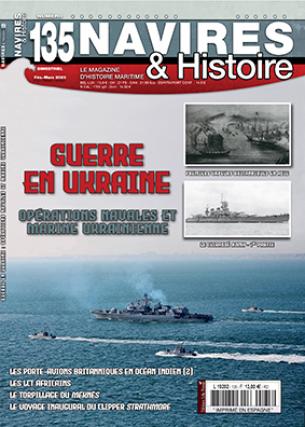 EDITORIAL:
We leave the port again to navigate, both to near or exotic seas and also to more or less distant periods.
Above all, we must thank the authors whose signatures are familiar to you, authors who, through the changes, continue to present you with unpublished and well-documented articles.
The news section changes, with more varied subjects and some striking information, without listing by date, news chosen for their interest. Your feedback is welcome!
The war in Ukraine is everywhere, no one can ignore it. As announced on the cover, we provide an update on naval operations and the state of the Ukrainian Navy.
And we will of course return to the Indian Ocean to follow the British aircraft carriers, which we will probably find on other seas.
Another unknown story, that of the superb Italian battleship, the Roma, which did not know combat, but an unfair fate.
We bring to light the dramatic end of the liner Meknes in July 1940, a forgotten drama that still raises many questions.
A little exoticism by sailing to Asia to discover the arrival of the first British steamers on this continent.
Worse than Robinson Crusoe, the castaways of the Strashmore on an icy island, an inglorious odyssey, a lesson in survival.
Here is, among other things, what you will discover in these pages.
Two small novelties: a section "Wrecks and survivors" to present famous ships sunken or on the contrary preserved, and another, "Destins of exception" which tells of exceptional adventures which could have happened to ordinary sailors, or sometimes careers great sailors.
And, since it's 2023, the editorial staff and all the authors send you their BEST WISHES for this new year, in our company, of course!