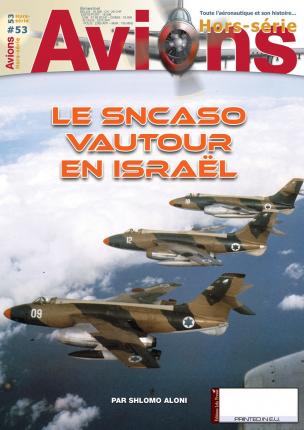 HS AVIONS N ° 53 to be released on june 10th, 2021! All the orders containing this magazine will be put on hold until its release.

The Vautour was one of the most important fighter planes of the French Air Force of the 1950s / 1960s. The Israeli military air force, whose fleet consisted of almost exclusively French combat aircraft at the time, detected a little more than thirty Vultures. These devices, in three different versions, were part of all the battles waged by Israel against its Arab neighbors. Powerful for the time, the Vulture could carry a greater bomb load than any other fighter jet in Israel. Despite numerous incidents and accidents, the jet has left lasting memories for all of its crews! This is the story of this French camera in Israel that Shlomo Aloni tells us in Special Issue No. 53.

With 128 pages, more than 200 photos, documents and 20 color profiles by Vincent Dhorne.

A Vulture in the land of hawks here is something to amaze or amaze the gallery because with its clumsy or even clumsy airs, this jet from the 50s / 60s has little to do with a thunderbolt, unless it is in the pilot hands of the quality of those of Israel who proves to be a formidable warrior.
If in France, which is his homeland, the Vulture made a banal and ordinary career without splinters in the sky of permanent war of Israel, he showed his discreet versatility, to such an extent that it appears only too little in the front of the media scene. And it took all the talent of Shlomo Aloni for this singular-looking zing to finally be reflected in the lights, to the delight of fans of "exotic" aviation ...
A special issue of high quality and high quality which, in addition to its first-in-class aspect, is as complete as possible with a quantity of iconographic and technical documents coupled with rare but precious testimonies ...
The vulture has found its place in the great aviary of the warring sky ...© Fleuves & Canaux