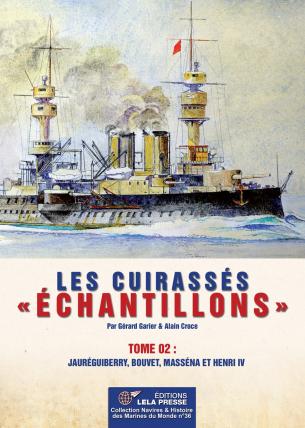 In the first volume of this work, our study concerned the genesis of the French armored fleet in the period between the war of 1870 and the crisis of Fachoda on the one hand and on the other hand the history of the first three battleships of this so-called “sample” fleet with the Brennus, Carnot and Charles Martel.
With this second volume, we are going to study the last three battleships of the 1890 program, Jauréguiberry, Bouvet and Masséna, as well as the “unclassifiable” Henri IV, a building which allowed the engineer Emile Bertin to design and carry out several innovations including the double hull, extensive cellular compartmentalisation and the use of superimposed turrets. Innovations that would radically change the design of large combat ships designed in the 1910s and beyond.
Three of these four ships took an active part in the Great War from one end of the Mediterranean to the other. And even the Massena wrote an innovative page: it will be scuttled to become one of the jetties of the port of Seddul Bahr. The creation of this "artificial" port will be the genius idea which will allow Franco-British troops to receive supplies and reinforcements which will enable them to fight in the Gallipoli peninsula. The lesson will not be lost since the concept of artificial harbor will be taken up in 1944 in front of the beaches of Normandy.
At the end of this work, a summary of the naval war in the Mediterranean, the paintings of silhouettes, painting, endivisionnements and rings of chimneys of the seven battleships studied in this work to which we have added their five contemporaries, Charlemagne, Gaulois, Saint Louis, Iéna and Suffren, because their careers are inseparable from those of Brennus, Carnot, Charles Martel, Jauréguiberry, Bouvet, Masséna and Henri IV, will allow owners of photos and postcards to date and locate them.