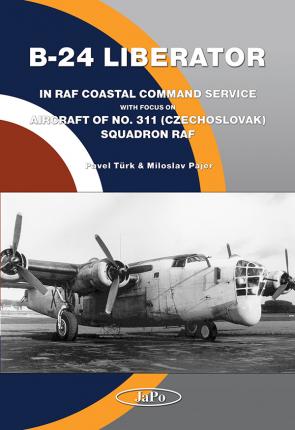 B-24 Liberator in RAF Coastal Command Service with Focus on Aircraft of No. 311 (Czechoslovak) Squadron RAF

Consolidated B-24 Liberator is one of airplanes which deserves special attention of aviation historians. B-24s took part in combat actions in all theatres of operations of WWII under quite different service conditions and performed everytime their tasks honourably. They flew over occupied Europe, heavy defended Germany and Japan, over Mediterranean, jungles of Burma and India, over wide areas of Atlantic, Pacific and Indian Oceans and among peaks of Himalaya.

With the number of aircraft produced - most numerous of all American and British airplanes and with the prolific combat career during WWII the B-24 belongs to the legends of the conflict and is predestined for being a thema of various titles.

Number of airplanes produced, different producers (Consolidated San Diego, Consolidated Fort Worth, Ford Willow Run, North American Dallas and Douglas Tulsa) and various operational conditions anticipated development of versions and variants which is the thema the author Pavel Türk has focused on. His extensive study provides systematic analysis of airframe differencies, armament and equipment of all variants according to producers, production batches and different users - USAAF, US Navy and Royal Air Force. The respectable range of the work however requires split into several parts which will be linked each other.

The first volume prepared for issue should be in fact the last one when we would go according to standard way because it deals with the special part of B-24’s operational service namely by maritime service by RAF. We proceed this way by two reasons. The RAF service and antisubmarine protection of convoy routes have started the B-24’s way to glory and there was the 70th Anniversary of B-24’s service commencemend by No. 311 (Czechoslovak) Squadron RAF in 2013. The title will deal by B-24s service by RAF Coastal Command but the main part will cover combat career of all B-24s assigned to the No. 311 (Czechoslovak) Squadron.