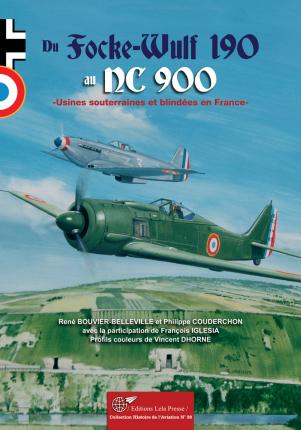 From the hasty implementation of the French program of underground and armored factories in 1939 to the return to service of German planes abandoned at the end of the war, including the Focke-Wulf 190 fighter repair centers in France busy, this multi-faceted book makes you discover an unusual aeronautical history partly related to the village of Cravant and its quarries located south of Auxerre.
A technical history of the hundreds of Fw190s revised under occupation in the centers of Villacoublay, Tours and Cravant before being reconditioned in NC900 after the liberation. But also a human story, embellished with many testimonies, men and women French, German, Spanish or Russian who were embarked by will or by force in this adventure.
You will discover the production of the NC900 in the underground Cravant factory and their operational use amidst political and ideological struggles, as well as the history of the units that employed them in the confused years of the post-war period. Like the famous Normandy-Niemen regiment where these "Focke hunters" with cockades rubbed the Yak-3 during a period of disappointment, between the triumphant return of the USSR and the transfer to North Africa in the late forties.
This book is based on reports of epochs and archival documents, as well as on the many testimonies collected and intersected during twenty years of research and sometimes surprising encounters.
480 illustrated pages of more than 870 photos (including a complete photoscope of the last surviving NC900 for model builders!), About twenty cards and about forty shots without forgetting the 26 color profiles and 5 detailed profiles of Vincent Dhorne. With the participation of François IGLESIA.

This book is the reissue of a 2018 book that I missed at the time.
The authors are among those who believe that to properly treat the "blue of the cockade", it is necessary to start with the "red".
Thus to approach the NC 900, their use by the Normandie-Niemen and others, they begin by examining their construction, as a continuation of the repair of the German Focke-Wulf 190 by the Front-ReparaturBetrieb administered by the German company AGO .. . including in particular that of Cravant ... which had started, before the war as a factory for the production of LéO 45 to the test of the bombs ... because yes it was not the Germans who invented the underground factories in 1944 but the French in 1939-40 !.
This is why this book begins ... in 1939 with the design and construction work carried out by the French with the aim of producing bomb-proof planes. In particular, the Cravant Air Workshop is a detailed subject.
In Part 2, the authors focus on the Focke-Wulf 190s repaired in France during the war.
The third part which is the most detailed (pages 196 to 430) concerns the production of Focke-Wulf renamed AACr then NC 900… in particular in the underground factory of Cravant and their use by the Air Force and the Royal .
In the end there are several annexes with production tables, a photoscope of the aircraft kept at the Air Museum, etc.
The context does not stop there: the many economic and political aspects are covered and we learn a lot about the National Societies of the period 1944-1950, in particular Aérocentre.
This book is based on dozens of testimonies, hundreds of photos and a large number of documents from Germany, France and the Allies.
In iconographic terms:
More than 700 period photos
· More than 150 sketches, maps ...
25 color profiles
This book is a must which in practice details:
French plans for armored or underground factories
The repair of German planes during the war
The industrial revival policy in France during the second part of the 1940s
The post-war Air Force rearmament policy
The construction of the NC 900 and the differences with the Fw 190 A (including photoscope)
The BMW 801 engine
· The Cravant plant (with plans etc ...)
· The appreciation of the NC 900 by its manufacturers and users.
Unavoidable ! © Modelstories