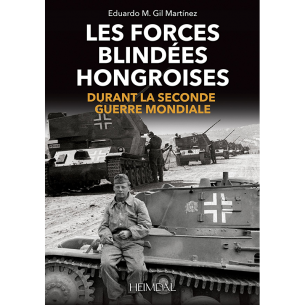 The actions of the German armored forces during the Second World War are well known to the public, in particular because of the numerous works which have been devoted to it. Those of the armored forces of their allied countries are, on the other hand, much less known. This work exposes the role of the Hungarian armored forces which, over the course of the world conflict, managed to constitute an armored corps powerful enough to exercise a decisive role on the front, although destined to face one of the most terrible adversaries of its time. time: the Red Army. Hungary not only succeeded in organizing its armored troops for the start of WWII with the support of Germany, but its military industry was also able to produce different types of vehicles and weapons for its own troops. Indeed, Hungarian industry, very diverse, succeeded in developing a whole local range of armored vehicles which, in some cases, showed an exceptional performance in combat until the end of the conflict. All the models from this industry are presented: the Toldi, the various Turan ... Over the pages, the author highlights the participation of Hungary in the Second World War thanks to a multitude of pictures provided by real experts in the material, as well as the role of the Hungarian armored forces, from Operation "Barbarossa" to the fighting in Ukraine two years later, then during the subsequent retreat to the Hungarian lands of the Carpathians, the defense of Budapest or the last clashes Hungarian armored vehicles in Austria or Slovenia, just before the unconditional capitulation of Germany. This book also evokes the terrible fate experienced by the Hungarian armored troops after the Soviet invasion of Hungary, many of whose soldiers and officers were sent to Soviet concentration camps for several years.