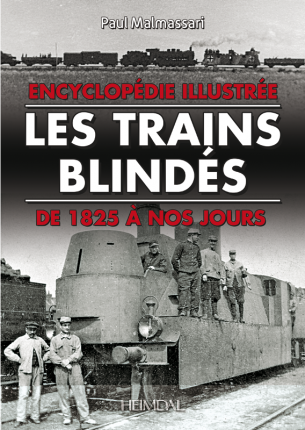 Editor's Note:
Paul Malmassari had already published, at the beginning of the 1990s, with Heimdal editions, a reference work on the subject of armored trains, generally little treated. An indisputable specialist in the field, the author offers this time a new and very different approach to the history of these steel giants dependent on railways. From the origins to the present day, the armored trains of more than sixty states are explained. Those of Russia, where they played an important role, among others in the civil war of 1917-1922; those of Germany - the Panzerzüge - and of France during the two world wars, are also described. But armored trains have a history on all four continents, including in countries one would not suspect they might have had.
The colossal, encyclopedic work, of more than 520 pages, makes this work an essential tool for any amateur or neophyte reader, interested or passionate about this very specific military field. It is richly illustrated with photographs, engravings, descriptive diagrams. Its particularity is to combine an indisputable technical precision with explanations of the historical times in which these “rail monsters” intervened. A reference book not to be missed.