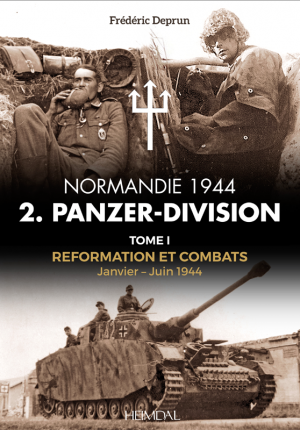 The project of a richly illustrated two-volume study on the German armored unit, the (Wiener) 2.Panzer-Division, will finally succeed. The author Frédéric Deprun spent more than ten years meticulously studying the commitment of this armored force in the Normandy countryside.
The first part proposes to trace the reformation of the unit while waiting for the landing towards Arras to lead the reader on the deadly combats in front of Caumont-l'Eventé, Cahagnes, Cheux then to Maysur-Orne in June and July 1944. It was necessary to give an account in a second work of the powerlessness of the Panzer unit to contain the allied offensive south of Saint-Lô at the end of July 1944, that of Mortain until the encirclement of the men of the Trident unit in the Kessel de Chambois / Argentan.
The two volumes of 350 illustrated pages of 800 unpublished photographs and more than 60 maps lead us through multiple testimonies on the paths of tragedy of the soldiers of the 2. Panzerdivision of Calvados until the crossing of the Seine.