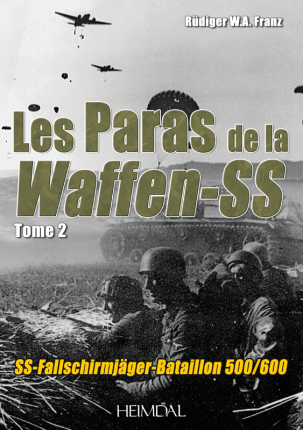 Here is a very poorly known subject. A Waffen-SS Para Battalion was formed in the fall of 1943 to carry out special missions. The author, captain of the French Luftwaffe (FRG), a German, French and US patent, in the sixties and now a historian, offers us a detailed history in three volumes of nearly 400 pages each. The first volume is devoted to the operation against the Tito troops in Yugoslavia, the second to the engagement in the Baltic States and the third to the operations in Hungary, in the Ardennes and in the bridgehead of the Oder.
The set of 3 volumes, devoted to this SS-Fallschirmjäger-Battalion 500/600, offers a total documentation of more than a thousand photos.