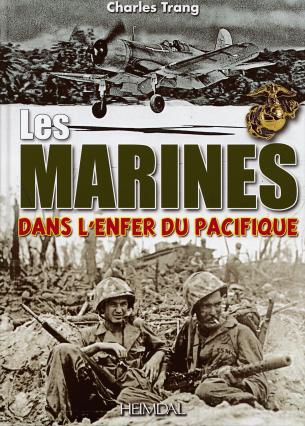 After the works dedicated to the Battle of Iwo Jima and the 1st Marine Division, Charles Trang offers us an encyclopaedic study on the Marines in the Pacific from 1941 to 1945, where each of their campaigns is treated in detail with many testimonials and photos mostly unpublished. Corregidor, Wake, Midway, Guadalcanal, Makin, Bougainville, Rabaul, Tarawa, the Marshall Islands, Cape Gloucester, Saipan, Tinian, Guam, Iwo Jima and Okinawa are all evocative names of bloody and ruthless battles where the Marines forged a reputation for tenacity, relentlessness and professionalism rarely equaled during the Second World War.
The comprehensive book also reviews all units of the US Marine Corps from fighter squadrons to autonomous artillery groups, paratroopers and Raiders. Orders of battle, command structures and portraits of all recipients of the Congressional Medal of Honor complete the package.