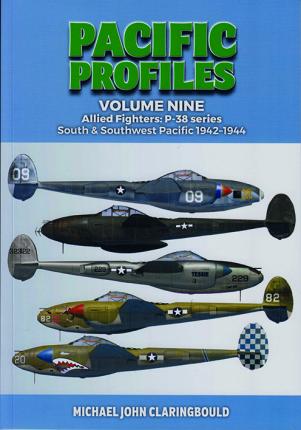 The Pacific Profiles series presents the most accurate WWII profiles of aircraft which served throughout the South Pacific. Volume Nine covers the P-38 and variants including the photo-reconnaissance F-4 and F-5, along with field-modified P-38G night-fighters. The P-38 flew combat in the SWPA and SOPAC theatres until mid-1944, serving a total of nineteen Fifth and Thirteenth Air Force USAAF combat squadrons, one service squadron, Fifth Fighter Command, and finally with the Combat Replacement Training Center at Nadzab.

Most profiles are presented for the first time, alongside an explanation of markings, including squadron heraldry and squadron codes. Until now there has been a paucity of accurate information about some markings, especially those which attend the Thirteenth Air Force, night-fighter and photo-reconnaissance units.
Each profile has been produced by citing wide-ranging reference material, including official squadron records, colour movies, maintenance logs, diaries, wreck site inspections and thousands of photos including colour slides. A brief summary history of each unit and the rationale of its markings completes the text.
The author, Michael Claringbould, is world-renown for his expertise on the Pacific air war. Never before have Pacific P-38s and their colourful derivatives been illustrated with such accuracy and detail.