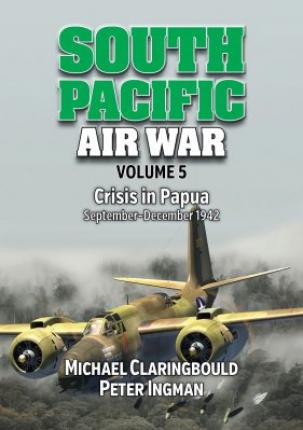 Volume Five of this series chronicles aerial warfare primarily in the New Guinea theatre in the critical period between September and December 1942. It can be read alone or as a continuation of the previous four volumes which span the first nine months of the Pacific War.

By early September the strategic picture in the theatre had changed markedly within just six weeks. From their new Buna beachhead the Japanese Army commenced a Papuan mountain campaign which threatened the Allied bastion of Port Moresby. Meanwhile the battle for Guadalcanal was raging, with the outcome of the wider Pacific War in the balance.
Against this background a strengthened US Fifth Air Force took the fight to the IJA with direct air support. While this was being conducted by P-39s, P-40Es, A-20As and B-25s, raids by B-17s against Rabaul aided US forces in the neighbouring Solomons. RAAF Beaufighters, Beauforts, Bostons and Hudsons also contributed substantially to these efforts.
At Rabaul a wide variety of fresh IJN fighter and bomber units poured in the theatre, although these became focused mainly on the Solomons. Such were the massive losses experienced, by November the IJN undertook a complete operational and administrative reorganisation of its air power. Then, despite a strong reluctance to become involved, the IJA sent an advance reconnaissance detachment to Rabaul, the forerunner of major reinforcements that would arrive in December.
Never before has this campaign been chronicled in such detail, with Allied and Japanese accounts matched together for a truly factual account of the conflict.