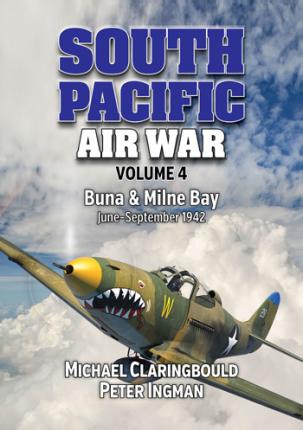 Volume Four of this series chronicles aerial warfare in the South Pacific in the critical period between 19 June and 8 September 1942. It can be read alone or as a continuation of the first three volumes that spanned the first six months of the Pacific War, culminating in the Battle of the Coral Sea.

Unlike the previous three volumes, no aircraft carriers appeared in New Guinea waters. Instead, the air war was fought solely by land-based air units. This was in the face of an increasingly complex strategic situation that saw the Japanese land at both Buna and Milne Bay. For the first time, airpower in the theatre was tasked to support the land forces of both sides which became engaged in a bloody struggle in the mountains of Papua and then the muddy quagmire of Milne Bay.

Two veteran Japanese air groups, the Tainan and No. 4 Kokutai, continued their Herculean struggle against mounting Allied opposition. In the face of continued attrition, Japanese pilots had many notable successes including several coveted aerial victories against B-17s. Then, from August a plethora of fresh Japanese units arrived including the No. 2, No. 6, Chitose, Misawa and Kisarazu Kokutai.

USAAF P-39s and RAAF P-40Es responded with low level close support missions, while B-25s, B-26s and B-17s ramped up an unrelenting bombing campaign. Towards the end of the period A-20A strafers made their combat debut, portending a radical blueprint for future attack tactics in the theatre.

Never before has this campaign been chronicled in such detail, with Allied accounts matched against Japanese records for a truly factual account of the conflict.