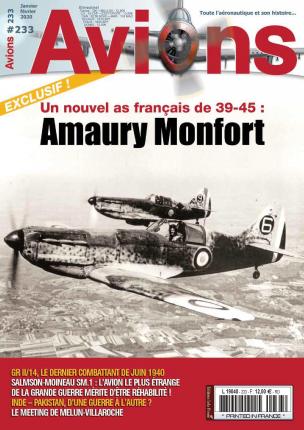 Some readers complaining on passionate forums that AVIONS articles are too "saucissonnes", we decided to offer you a magazine with fewer articles but more complete stories. Will the pleasure of reading be increased? It's up to you to tell us! We will react accordingly.
What does not change, however, is our willingness to share our discoveries. Publish for the umpteenth time an article on the "king of Stuka" Hans-Ulrich Rudel or "the immortal" P-51 Mustang, all using archi-known photos often transplanted on the Net, where is the interest? Just search for nuggets. The proof: 75 years after the end of the Second World War, Alain Coste has identified - evidence in support - a new ace of the French hunting! He makes us discover it with completely new personal documents, just like Matthieu Comas who presents the last French reconnaissance group to have operated in June 1940. Jan Bedrich draws a picture of the aerial combats that still oppose the India and Pakistan, two great powers that have not finished talking about them. I have the pleasure of rehabilitating a rather incredible aircraft of the Great War, almost unknown even if the most far-fetched information circulate about it: the Salmson-Sparrow SM.1, a single-engine aircraft and two propellers to which it was better not to rub ...

In summary :
- Mail of the readers
- Amaury Monfort, GC II / 1 unknown ace. Complete story, by Alain Coste.
- News: The Air Force of September 1939 in Melun-Villaroche. By the Collectif France 40.
- India against Pakistan. From one war to another. Complete story, by Jan Bedrich.
- 1940 - GR II / 14. The last fighter. Complete account, by Matthieu Comas.
- Salmson-Sparrow SM.1. The strange triplet of corps squadrons ... First part, by Christophe Cony.
- Info-hobbies. By Michel Ledet and Christophe Cony.

In front page :
Hunters Dewoitine D. 520 GCB 1/18 "Vendée" in flight in spring 1945. It is in this group, equipped with equipment captured to the Germans, that the actress of the campaign of France Amaury Montfort fought on the pockets from the Atlantic until the end of the war.