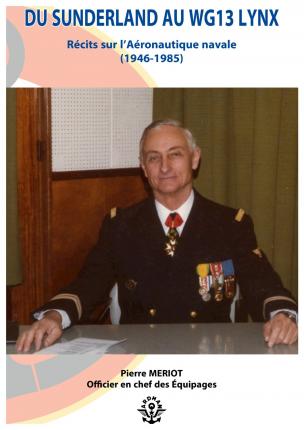 This book contains 43 stories placed in chronological order from 1946 to 1985. They do not cover in extenso the various assignments of the author but highlight the dramatic or comical actions that took place during 39 years of service.
Thus, the spotlight is given to missions and trips on the Short Sunderland four-engine seaplanes, at a time when mechanics, who were in principle non-flying, also entered the crew: exoticism and incidents abound, human relations are copies. The entry into service of the Lockheed PV-2 Harpoon twin-engines in 1953 gives rise to a thrilling story of ferrying from San Francisco to Les Mureaux. It is of course in Algeria, on H-19 then HSS helicopters that the dramatic atmosphere is best described and we can appreciate the camaraderie between the sailors and the Foreign Legion.
We enter with the author into the technical difficulties that must be resolved for large tonnage rotary wings (Super Frelon). The use of composite material, titanium for the rotor of the Lynx, makes our heads spin. Cooperation with the British is giving a hard time. We feel that perfidious Albion is never far away.
Finally, we would all like, on leaving the Navy, to know testimonies of friendship and camaraderie as moving as this officer received in 1985 on the naval air base of Saint Mandrier.