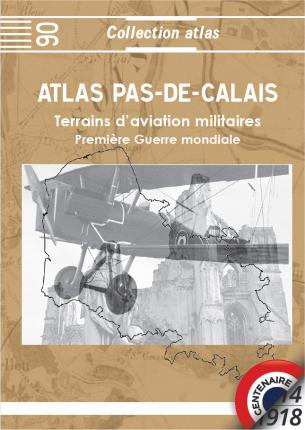 This issue 06 of  Atlas Collection is devoted to the department of Pas-de-Calais where were mainly deployed British troops (BEF) which we describe here a little less than 150 aerodromes. Most of them are British, although there are also French sites and, in smaller numbers, German ones. Much of the land included in this atlas is British and could be located precisely with the plans and sketches of time extracted for us from the British archives. The lands without precise territorial location could be identified thanks to the archived newspapers of the units mentioning their parking lots.
No remains remain today, the equipment being composed only of easily removable sheds and canvas tents. These devices were designed from a mobility perspective for aviation to easily follow the movement of ground troops. Only a few rights-of-way, such as Saint-Inglevert or Saint-Omer, still exist and are still used. The aerodrome of Saint-Omer where a big airshow in 1910 takes place will become, from 1914, the N ° 1 Aircraft Depot and the headquarters of the Royal Flying Corps (RFC) and which will employ up to 4000 people. It will become, in April 1918, 100 years ago, the Royal Air Force (RAF), which
commemorates his centenary this year. For each field, QR Codes allow
locate and visit the site, view the updated Material Safety Data Sheet on our website and, for some, access local resources.
A book by Daniel Spada and Jean-Michel Borde based on research by Roger Austin.