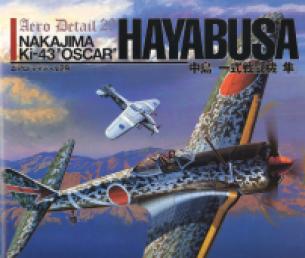 The Hayabusa (Peregrine Falcon) "Oscar" was the most widely flown fighter of the JAAF and appeared in every theater of operations during the war. This is the aircraft that most of the Japanese aces scored their kills. Amazing considering just how under gunned (2 7.7mm MGs later 1 12.7mm and 1 7.7mm MG) and un-protected it was. This aircraft was the only one to have had a song written for it that is still sung in Japan today.

The superb-condition planes in the Alpine Fighter Collection in New Zealand (now sold to an undisclosed collector) and EAA (Experimental Aircraft Association) Museum are covered completely with 202 full-color detail photos. As usual, dozens of pages of technical drawings, marking illustrations, three-views and b/w historical photos show off what the detail photos cannot. Concise diagrams take you through all variants of the plane and point out key differences. The perfect modeling reference. A must for WWII aviation fans!