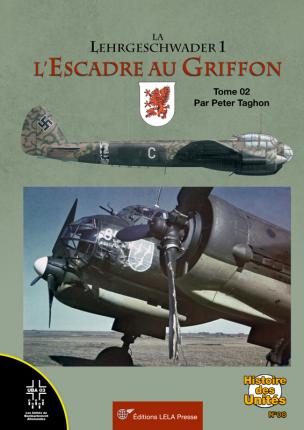 The Lehrgeschwader 1 engaged in the Mediterranean from the beginning of 1941 against the British forces had very quickly been respected by its opponents (whether they were of the Navy or the army), having won during these bloody battles the dreaded nickname of 'Helbig's flyers' (after the name of one of its best officers). But, in September 1942, the III./LG 1detached 'temporarily' to the USSR and therefore cut off from the rest of the squadron, was redesignated III./KG 6. The I./KG 55, also flying on Ju 88, became thus the new III./LG 1. If this Gruppe was dissolved in May 1944, the I. and II./LG 1 fought for their part until the end of the war, leaving Italy to be engaged on Normandy at the time of the Landing in June 1944 then on the Reich both in the west (Battle of the Bulge) and in the east (facing the Soviet steamroller). The remainders of LG 1 were not de facto dissolved until the beginning of May 1945. During this whole period of war, the squadron mainly flew on various types of Ju 88 (A-5, A-4, A- 14, S-3). While other Kampfgeschwaders were equipped with more modern devices (Ju 188 or Do 217), the LG 1 fought to the end on planes that one could call obsolete. But, while the other KGs were dissolved or passed on fighters, the Lehrgeschwader 1 was one of the very few Luftwaffe units to cross the six years of war as a pure bombing unit.

A 288 page book illustrated with 600 photos and 29 color profiles by the hand of Thierry Dekker. In this Volume II are numerous appendices (losses of the unit as well as lists of the planes, aviators and officers having led the groups and the squadrons).

We talk about it on the net and in the Press:
This block of approximately 290 pages follows the first volume on the LG 1 in order to study unity between May 1942 and the end of the war.
We can follow in turn the operations in Africa until the departure of the griffin squadron in 43 before invading Sicily and leaving again in Italy then in France and finally in Germany to defend a dying Reich.
This work is embellished with around 600 photos and perfectly enriched with 29 superb profiles by Thierry Dekker, a source of inspiration for model makers.
The photos show interesting details on the weaponry or specific versions like the Mistels at the end of the war as well as scenes from the life of the unit.
The text is very precise on the operations carried out by the LG1.
Even if this unit was not equipped with fighter planes, the Ju-88 remains a very popular plane with model builders and this tome (like the previous one) should delight many of them.
At the end of the work, the appendices deal with the known losses of the unit, the serial numbers of the aircraft used, members of the personnel flying during the whole war, members of the Iron Cross medalists and finally the commanders of units. .
These two books remain an essential source on the LG1 and are highly recommended for fans of the subject. © Christophe Verdoux for Master194 / Smal-tracks.org / Fighters.forumactif.com.

- All that has been said for the first volume (see above) can be re-said on this second: many extracts from memories of pilots integrated into a chronological text which itself must derive from a March Journal unit.
On the other hand, the variety very present in the first volume gave way here to the Ju 88 Super-star and especially in the Mediterranean from Tobrouk to Greece (but also Normandy and Northern Europe at the end)! But with very varied camouflages: spotted, "meandering", sand etc. Note that the meanders are always interpreted as being in RLM 65 on the underside (including in the beautiful profiles of Th. Dekker), but this n is not always true: see page 140, 154, 155, 169.
Here too a small chapter, even seeing a simple box on camouflage would have been useful! (among the oddities mentioned but not illustrated: the existence of a Ju 88 registered "L1 + AMB"! Confirmed by the pilot's testimony.
Also note a page dedicated to ... Delanne 10C (page 117)
Also accounts of these crew members of the infantry in the final weeks of the war.
In annex:
· A list of known losses
· A list of devices used by the LG1
· A list of all identified flying personnel having passed through the LG1.
· A list of Ritterkreuzträger from LG1
· A list of wing, group and squadron commanders
The iconography:
· More than 500 black and white photos: planes, pilots, vehicles, aerodromes…
· 10 vintage color photos (plus a few modern photos: graves, excavation of wrecks).
· 30 color profiles.
In conclusion: those who appreciated the first volume, will not be disappointed by this second opus which has the same qualities of quality of research, ease of reading and iconography. .. © JCC - MODELSTORIES.

- The LG1, after its battles in Africa, found itself tossed about as events unfold, parts of the group even being detached to the east. The Geschwader remained in Africa until 1943 before moving up through Sicily, Italy, France and then Germany to fight until the end. Its personnel fought until collapse, on all fronts in essential battles like the Allied landings in June 1944, the Ardennes in the winter, and attempts to curb the Soviet advance. During all these battles the unit knew of only one type of aircraft, the Junkers Ju-88 in all its versions, although it might have seemed outdated by the end of the conflict.
The Lehrgeschwader 1, LG 1 is a special unit in several ways. Established, as its name suggests, as a training unit from the rebirth of the Luftwaffe in 1933, it actively participated in the victorious campaigns of the Wehrmacht with disparate equipment because it was equipped with He-111, Bf-110 and Ju -87 before being equipped with Ju-88. She will remain equipped with this device until the end of the conflict.
This second volume takes us throughout these fights. The first was about the period of victories, there we follow the losses, until the collapse.
As with the first volume, Peter Taghon gives us a fascinating, very detailed and documented text, which is very pleasant to read. The iconography is still remarkable with more than 500 black and white photos and others in color. The superb profiles of Thierry Dekker are obviously an additional asset for this “pavement” of almost 300 pages!
The appendix contains lists of personnel, unit commanders, decorations awarded, known casualties and aircraft used.
This eagerly awaited second volume confirms the impression of the first, and we now have nearly 600 pages to trace the history of this particular unit. To acquire quickly, there will be no better! © J Luc Fouquet.

- The Lehrgeschwader 1 engaged in the Mediterranean at the beginning of 1941 against the British forces was very quickly respected by its opponents (whether they were from the Navy or the Army), having won during these bloody battles. the dreaded nickname of 'Helbig's flyers' (after the name of one of its best officers). But, in September 1942, the III. / LG 1, detached temporarily ’in the USSR and therefore cut off from the rest of the squadron, was redesignated III.
/ KG 6. The I. / KG 55, also flying the Ju 88, thus became the new III. / LG 1. If this Gruppe was dissolved in May 1944, I. and II. / LG 1 fought for their part until the end of the war, leaving Italy to be engaged in Normandy at the time of the Landing of June 1944 then in the Reich both to the west (Battle of the Bulge) and east (facing the Soviet steamroller).
The remnants of the LG 1 were not de facto dissolved until the beginning of May 1945. Throughout this period of war, the squadron mainly flew on various types of Ju 88 (A-5, A-4, A- 14, S-3). While other Kampfgeschwaders were fitted with more modern devices (Ju 188 or Do 217), the LG 1 fought to the end on planes that could be described as outdated. But, while the other KGs were disbanded or passed over to fighters, Lehrgeschwader 1 was one of the very few Luftwaffe units to survive the nearly six years of war as a pure bombing unit.
A 288-page book illustrated with 600 photos and 29 color profiles by Thierry Dekker. In this Volume II there are many appendices (the losses of the unit as well as lists of aircraft, airmen and officers who led the groups and squadrons). © EIPA-Confrontations

In this second volume of nearly 300 pages, the author continues the exploration of the Lehrgeschwader 1 walking journal created by the Luftwaffe in 1936, initially for instruction. We find the squadron in North Africa and the Mediterranean at the end of April 1942, in Tobruk, then in Alamein, Malta and in the Greek islands over the course of campaigns costly in men and materials, including that of Sicily from May 1943. unit is then sent to Belgium, to Melsbroek, to try to contain the Allied advance following the landing of Normandy. Confronted with increasingly important logistical problems, it finds Germany and fights on both fronts, awaiting the inevitable fall of the Reich. After the successes detailed in the first volume, it is above all the defeats which follow one another here, in a profusion of information accompanied by rather unpublished photos and superb profiles signed by Thierry Dekker. The appendices alone justify the purchase of the book, listing known casualties, parwerknummer aircraft in staff, squadron strength, Iron Cross recipients, and unit leaders. SP288 pages, 510 B&W photos, profiles, text in French. © Sam Prétat - AIR FAN 474.