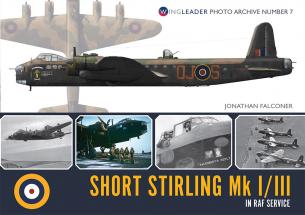 This series is unique in that it will be able to provide large format ORIGINAL photos up to full A4 landscape format width, which is at least 50% larger than any standard book can deliver.  Combined with the specialist knowledge of a team of historians and contributors, each book should provide unbeatable and accurate references for any modelling or painting project.

"After the very positive reaction to our first Lancaster book in this series, we’re delighted to continue our RAF Bomber Command theme with this, the first of two books on the Short Stirling.  For us, there was only ever one author ‘in the frame’ for this one and we're delighted to say that Jonathan Falconer accepted the challenge and has produced a stunning tribute to this leviathan of the skies.
The Stirling has come in for a lot of Flak over the years, both literally and metaphorically. Hampered by a poor service ceiling and a Dastardly and Muttley style undercarriage, it has always lived in the shadow of the more illustrious Lancaster and Halifax. However, most crews that flew the Stirling were very fond of the aircraft and although its capabilities as a bomber were never as strong as its contemporaries, it blossomed into an extremely useful glider tug and Special Duties aircraft towards the end of the war. This aspect will be covered in our second book on the aircraft.
As usual in this series, we devote most of the space to high-res original wartime photos, which we examine very closely to pick out details that have been hiding in plain sight for over 70 years."