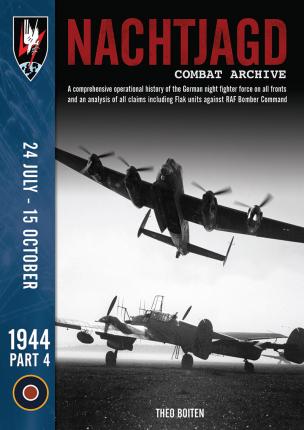 The Nachtjagd Combat Archive is possibly the largest WWII aviation project ever published.

In simple terms, the Nachtjagd Combat Archive is a comprehensive record of over 6000 Luftwaffe Night Fighter Claims and over 2100 Flak claims which have been painstakingly matched to RAF Bomber Command losses resulting in over 95% of them now being identified.  This means that for the first time ever, the fate of the vast majority of RAF Bomber Command losses can be clearly understood with exact locations, times and identities of the pilots or Flak units responsible for bringing them down.

This volume is the fourth of five volumes to cover 1944, a year where the tables finally turned against the Nachtjagd, but not before it had inflicted terrible losses upon RAF Bomber Command. This volume covers the period when RAF Bomber Command returned to night bombing after supporting the D-Day efforts.