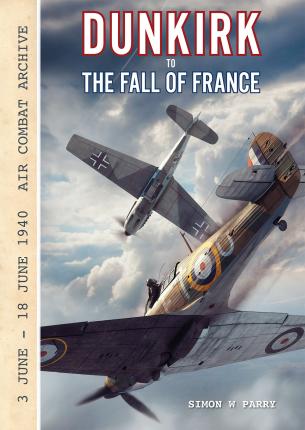 Dunkirk to the Fall of France - Air Combat Archive

Following the great success of our Dunkirk Air Combat Archive book, we decided to 'fill the gap' between this book and the first volume of the Battle of Britain Combat Archive. This period is rarely covered in books despite a lot of significant fighting taking place both over France and the UK.

There was too much information to fit into one volume so we have split it into two.

This first volume 'Dunkirk to the Fall of France' covers 3rd - 18th June 1940. This period is significant as it begins at the end of the Dunkirk evacuation and ends on the day that the RAF flew its last operational sorties from France. During this hectic two weeks, RAF squadrons in France retreated further and further south, becoming ever more scattered and outnumbered. Squadron records were either lost or destroyed making this fortnight very difficult to research. Despite this, the author has managed to piece together the combats and losses that took place and illustrates them with detailed maps as well as the usual combat and intelligence reports.